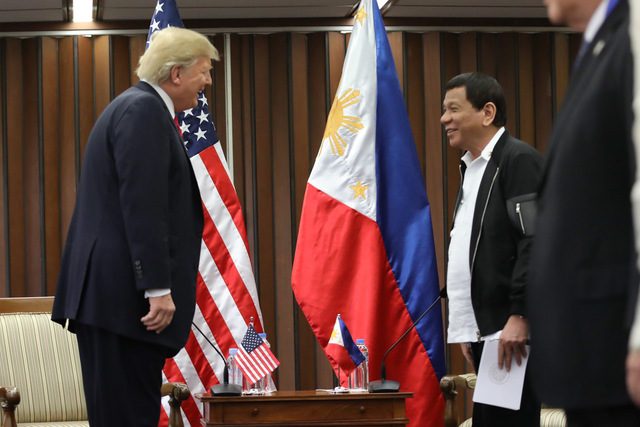 Facebook Twitter Copy URL
Copied
(UPDATED) The United States welcomes the suspension, which will last for an initial period of 6 months

MANILA, Philippines (UPDATED) – The Philippines on Tuesday, June 2, announced it has suspended an earlier notice that it was terminating the country’s Visiting Forces Agreement (VFA) with the United States, owing to “political and other developments in the region.”

Foreign Secretary Teodoro Locsin Jr made the announcement on Tuesday, saying he has sent a diplomatic note to US Ambassador to the Philippines Sung Kim, and that “it has been received by Washington and well at that.”

“The abrogation of the Visiting Forces Agreement has been suspended upon the President’s instruction,” Locsin tweeted.

I issued this diplomatic note to the US ambassador. It has been received by Washington and well at that. The Note is self-explanatory and does not require comment except from me. The abrogation of the Visiting Forces Agreement has been suspended upon the President’s instruction. pic.twitter.com/BXqzyNpOty

The development comes nearly 4 months after the Philippines sent a notice to Washington last February 11 that it would abrogate the decades-old military deal. (TIMELINE: Duterte’s threats to terminate the Visiting Forces Agreement)

Locsin earlier warned of the far-reaching consequences if the Philippines were to abrogate the VFA.

What happens next? While the Philippines backtracked on its earlier move to walk away from the deal, the government’s latest notice to the United States said the suspension, effective on June 1, “shall continue for 6 months” and can extend for another half year after.

Following the consecutive 6-month suspension, the Philippines said “the tolling of the initial period” in its February 11 note verbale will resume.

In the meantime, the Department of Foreign Affairs said the Philippines “avails itself of the opportunity to renew to the embassy of the United States assurances of its highest consideration.”

Where it started. President Rodrigo Duterte had first broached his plan to terminate the VFA on January 23, after the US canceled the visa of Senator Ronald dela Rosa. Dela Rosa is Duterte’s first Philippine National Police chief, known as the architect behind the government’s bloody anti-drug campaign.

Duterte decided to do so despite Locsin and Defense Secretary Delfin Lorenzana’s earlier push for a review of the VFA rather than its outright termination.

On several occasions, Duterte claimed he was serious about his decision, saying his choice to do so had also been anchored on US lawmakers’ moves to impose travel and financial restrictions on Philippine officials linked to the detention of opposition Senator Leila de Lima and alleged extrajudicial killings or EJKs under his drug campaign.

On Tuesday, the United States said it welcomed the Philippines decision, adding it looked forward to “continued close security and defense cooperation with the Philippines.”

Since the start of the coronavirus pandemic, the US government has donated P780 million (nearly $15.5 million) in assistance to the Philippines to boost the country’s testing capacity and provide support for business and health workers. – Rappler.com