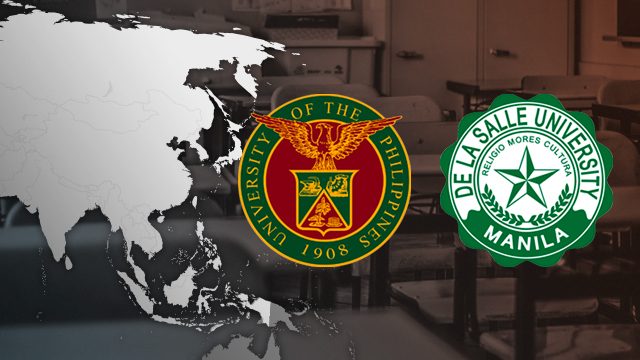 Facebook Twitter Copy URL
Copied
In the latest Times Higher Education rankings, the University of the Philippines climbs 30 points and is now 65th in the region. The De La Salle University, meanwhile, slides down to the 301-350 bracket.

MANILA, Philippines – The University of the Philippines (UP) inched up in the latest Times Higher Education (THE) Asia University Rankings released Wednesday, June 3.

The THE Asia University Rankings based its scores on the same indicators used in its world rankings. These include 13 performance indicators that cover teaching at 25%, research at 30%, citations at 30%, international outlook at 7.5%, and “knowledge transfer” or industry income at 7.5%.

Universities are scored on a scale of 100 according to these parameters.

Below are this year’s top 10 universities in Asia according to the Times Higher Education:

According to the Times Higher Education, China bagged the top two universities in Asia for the first time this year, as Tsinghua University topped the list and Peking University climbed 3 places to rank second.

Japan remained the most-represented nation in the list with 110 institutions, up from 103 in 2019.

This year’s rankings include 500 universities from 30 countries. – Rappler.com