Filipinos abroad with coronavirus now at 8,627

Gov't to allow religious gatherings at 10% capacity in GCQ areas

(UPDATED) 7 activists, including minors, belong to local progressive organizations in Cebu. The other person arrested is a bystander who did not participate in the rally 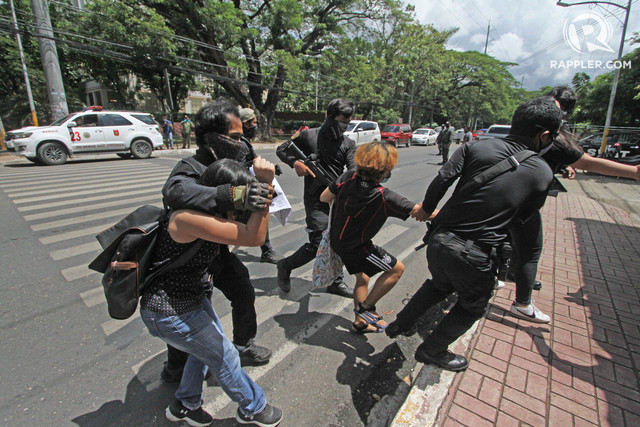 ARRESTED. Police drag two activists who joined an anti-terrorism bill protest in front of the gfate of University of the Philippines Cebu campus on June 5, 2020. Police say they violated the rule on mass gathering as Cebu City is under general community quarantine Photo by Gelo Litonjua/Rappler

ARRESTED. Police drag two activists who joined an anti-terrorism bill protest in front of the gfate of University of the Philippines Cebu campus on June 5, 2020. Police say they violated the rule on mass gathering as Cebu City is under general community quarantine Photo by Gelo Litonjua/Rappler

According to initial reports, among those arrested was Dyan Gumanao, a community organizer and a reporter for ANINAW Productions, a local affiliate of AlterMidya – People's Alternative Media Network.

Brigadier General Albert Ferro, Central Visayas' police director, denied cops violated the accord, saying the police were in hot pursuit of the activists.

Ferro said the police did not have a problem with the detained individuals' right to express, but he insisted gatherings increase the risk of spreading the coronavirus.

"They are basically endangering the people of Cebu because we are in a pandemic situation. Why would they protest? They are just exposing, if they have the disease, they are just spreading the disease to other people, so that's why we are preventing it," he said.

"We are not against the expression of the mass protest if it's only in [a] normal situation. Now, it's not normal," he added.

The anti-terror bill, approved by the House of Representatives on Thursday and by the Senare months earlier, sparked outrage among human rights groups and concerned citizens, who noted that this law would hand too much power to President Rodrigo Duterte, who had been widely criticized for his human rights record. (READ: 'Draconian' anti-terror bill, feared to be used vs gov't critics, hurdles Congress)

The College Editors Guild of the Philippines condemned the arrest of the activists. "Duterte's police and military are using militaristic approach instead of heeding the people's demands," the CEGP said in a statement.

"This clearly manifests how the systemic targeting of critical voices is prevalent everywhere," UPOSR said. "When those in power are not even held accountable, students like ours who are only echoing the public’s sentiments are those who are handcuffed and silenced."