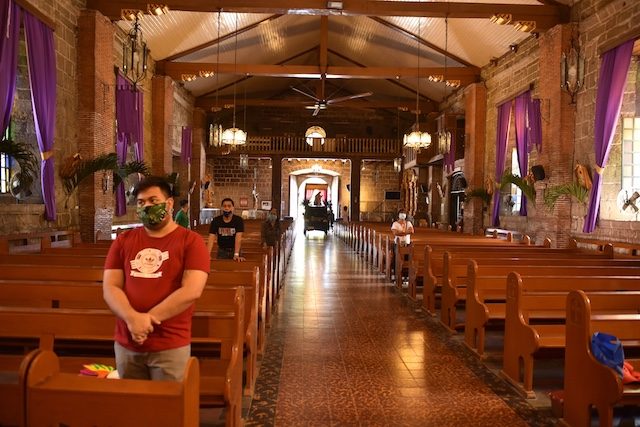 CAVITE, Philippines – Churches in Cavite have begun preparations for the resumption of public masses in over a week’s time, should the province be placed under modified general community quarantine (MGCQ) starting June 16.

Bishop Reynaldo Evangelista of the Diocese of Imus said in an interview that parish priests in Cavite cities and towns have put in place precautionary measures in place following the guidelines set by the government’s coronavirus task force.

“All the parish priests in 82 parish in 7 cities and 16 towns of Cavite are putting markings on all benches, sanitizers, alcohol, foot bath at the entrance of the church, thermal scanners – same as other gadgets used in IATF protocols,”  Evangelista said.

Cavite has a population of 3.67 million based on the 2015 census.  In 2010, it had the second largest Catholic population in the country, after Cebu. (MAP: Catholicism in the Philippines)

Churches in areas under MGCQ are allowed to hold mass services at 50% seating capacity.

Ushers and lay people will help ensure that mass attendees observe social distancing and other rules inside and outside the church.

The Catholic Bishops Conference of the Philippines (CBCP) has suggested to add more mass schedules to keep churches from getting too crowded.  Anticipated masses will start at 12:00 noon of Saturdays for this purpose.

Aside from physical distancing and mandatory wearing of masks, communion will be given to a mass attendees’ hand instead of placing it in the latter’s mouth.

Each church in the province has a different way of applying the physical distancing requirement on the pews. Some have seats are numbered to match the number of people who would be allowed in, while pther churches are putting up barriers between seats.

Churches will impose one-way movement of people heading to the entrance and the exit to avoid people bumping into each other.

In a message to Caviteños, Evangelista said what he had observed since the coronavirus lockdown in mid-March was was that “the people are praying more often, many families pray together, attending mass via social media livestream during the past 13 Sundays of lockdown.” – Rappler.com