MANILA, Philippines – A heated discussion on integrity and the screening of Philippine judges ensued Saturday, March 17, as a Rappler story on Chief Justice Renato Corona’s academic records trended on Twitter through the hashtag #CoronaHonors.

Posted by Rappler this week, the story pointed out inconsistencies between Corona’s resumé and public records released by his school, the Ateneo de Manila University. Netizen Abdul M. (@wulfricbrian) said that while Corona’s academic records are not as “important” as other issues, he believes “issues on his grades should be resolved to establish his moral ascendancy.”

JM Vecideux (@jmvecideux), for his part, said embellishing one’s resumé should be an impeachable offense. “Baka nagamit pang basis ang faux credentials niya para umangat sa puwesto,” Vecideux said. (His fake credentials might have even been used by him to rise in public office.)

Twitter user JP Alipio (@JPAlipio) said Corona broke the public trust that is supposed to characterize the SC. “When members of (the) SC fudge facts like credentials, how do you trust them to hand down decisions that affect the entire nation?” Alipio is a contributor to Rappler.

On the other hand, Gabby (@Gabby_09) said the #CoronaHonors issue is “very Filipino.” “The Philippine diploma factor is not a made-up story. It’s for real. So why (should) #CoronaHonors be a shock to (Filipinos)?”

Beryl Jane dela Cruz (@beryljane) pointed out that cheating is not merely Filipino culture but “human nature.” “Neither makes for a good justification,” Dela Cruz said.

Later in the afternoon, the #CoronaHonors discussion moved toward the screening of judges – in particular, the Judicial and Bar Council (JBC), the body which vets nominees to the judiciary. 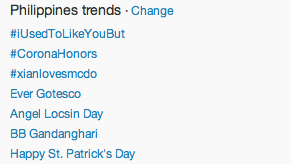 “Did the JBC or the Ramos administration require Corona for certifications of his achievements from @ateneodemanilau?” asked Twitter user Meddie Arbolado Jr (@agentX69).

Ronald Rosas (@rocastroph) said the #CoronaHonors discussion provides a chance “to look into how JBC vets candidates and improve where needed.”

To contextualize the discussion on the JBC, Rappler reposted a previous Newsbreak story on the JBC, a body whose composition makes it prone to political pressure.

The #CoronaHonors story, however, also drew criticisms from Corona’s defenders and other netizens.

Noem Lardizabal-Dado (@momblogger) also said the issue on Corona’s honors is not connected to his impeachment. “Why would it be dignified with an explanation?”

“(They’re) trying to convict CJ Corona with other unconfirmed issues, to distract the public from CJ’s explanations through his defense (lawyers),” said Twitter user Team CJ Corona (@TeamCJCorona) in a mix of English and Filipino.

For his part, Twitter user Filipino Thinker (@FilipinoThinker) criticized Rappler for “picking on grade school report cards.” “Grow up,” the netizen said. “It’s so funny how Rappler is trying so hard to turn it into an ‘issue.’ Juveniles talaga.”

The Twitter discussion is still ongoing through the hashtag #CoronaHonors. – Rappler.com