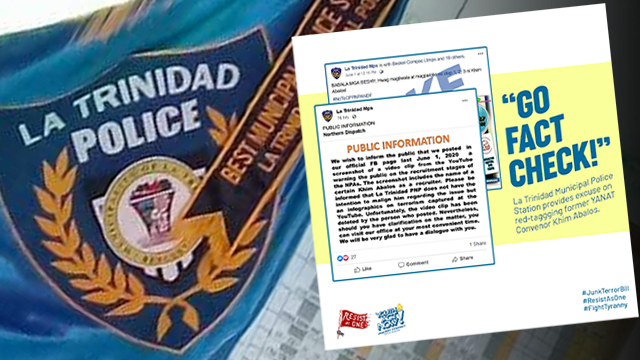 The cops originally posted on their official Facebook page a screenshot of a video clip from Youtube warning the public of the recruitment practices of the communist armed rebel group New People’s Army. This post included the name of Khim Abalos as a recruiter of leftist groups.

Abalos is a convenor of the group Youth Act Now Against Tyranny Baguio (Yanat).

“Please be informed that La Trinidad PNP does not have the intention to malign him regarding the issue,” the police said in a statement after the takedown.

They clarified that the post was an infographcs on terrorism captured in a video clip on YouTube which was later on deleted by the owner.

But the youth called the police statement “a non-apology for circulating a post that implicated Abalos and his organizations (Yanat included) as terrorists.”

“While this initiative of the La Trinidad municipal police station may look laudable, the damage has already been done. With the recent railroading of the anti-terror bill, such acts, if continued, will put the lives of these red-tagged and terrorist-tagged organizations and individuals at risk,” the Yanat statement said.

The La Trinidad police invited Yanat to a dialogue, but the youth group refused the invitation. Instead Yanat said it was taking legal actions against the law enforcers.

They urged the police to do fact check, apologize and stop red-tagging journalists and activists.

What happened to Abalos was not an isolated case. According to Yanat, the incident happened a week after the youth group filed a formal complaint to the Commission on Human Rights-CAR against the Benguet Provincial Police Office, Police Regional Office- Cordillera, 54th Infantry Battalion of the Philippine Army (Charlie Wildcat), and the 5th Infantry Division (Kabalikat Star Troopers) for a series of red-tagging and terrorist tagging posts circulating online.

“It’s a shame for a state machinery, well-funded for its programs, to sow fake news and endanger the lives of the youth,” the youth group said.