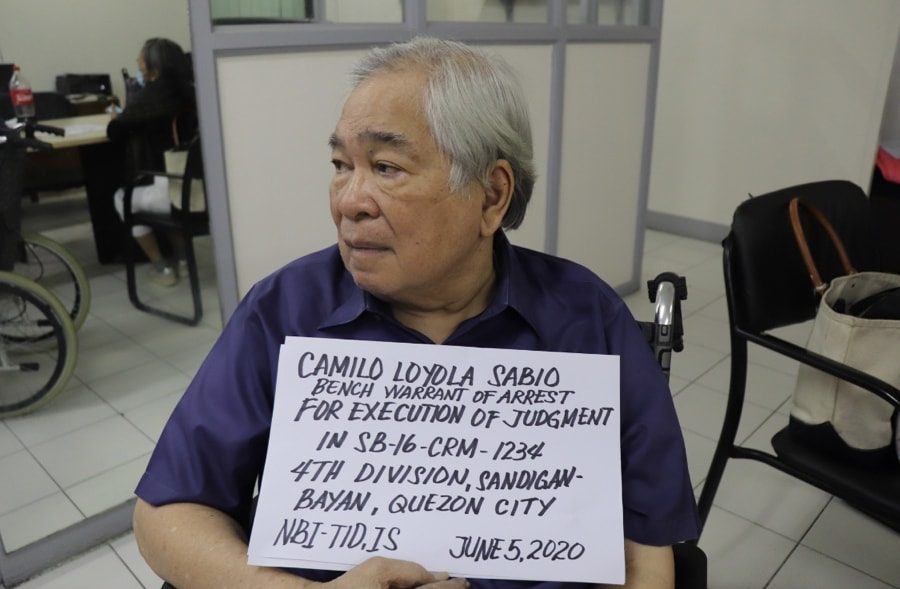 MANILA, Philippines – The National Bureau of Investigation (NBI) said on Sunday, June 7, that it arrested former Presidential Commission on Good Government (PCGG) chairman Camilo Sabio for one of the criminal cases he is facing at the Sandiganbayan.

The NBI said Sabio was arrested on Friday, June 5, at his home in Quezon City.

Agents from the NBI Technical Intelligence Division made the arrest based on a warrant issued by the Sandiganbayan 4th Division, which was in relation to execution of judgment in one of Sabio’s pending cases.

After his arrest, Sabio was brought to the anti-graft court on Friday afternoon, though it was closed due to sanitation procedures in line with the coronavirus outbreak.

The NBI said Sabio was taken to the bureau’s detention center and will be brought back to the Sandiganbayan on Monday, June 8.

Sabio, 83, chaired the PCGG from 2005 to 2010. He faces a number of graft charges pending before the Sandiganbayan.

Sabio had been convicted of several bailable criminal cases before, but the convictions are on appeal. Defendants convicted of bailable offenses get to keep their freedom until their conviction becomes final at the Supreme Court. – Rappler.com