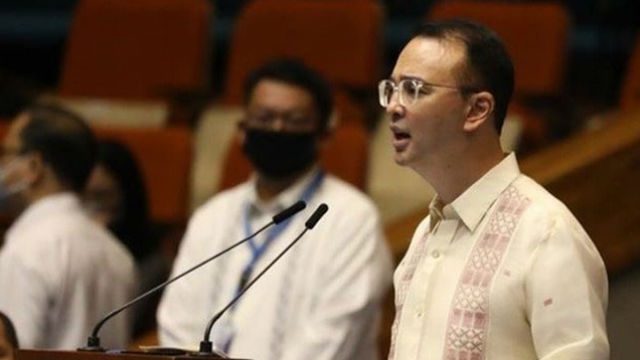 Facebook Twitter Copy URL
Copied
'It is right to be vigilant to abuses, but it is wrong to see a conspiracy behind every action of government,' says Speaker Alan Peter Cayetano

MANILA, Philippines – On the day Filipinos mark their independence from oppressors, Speaker Alan Peter Cayetano said freedom “always comes at a price” and urged the public not to see a conspiracy behind every decision of the government.

In what seemed to be another defense of the controversial anti-terror bill, Cayetano said on Friday, June 12, that when it comes to terrorism, the government is tasked to find the balance between liberty and public safety.

“Freedom always comes at a price. People reckon this differently based on their particular circumstance. But one thing is clear in my mind, the price for freedom – no matter how steep – is always worth paying,” Cayetano said in his Independence Day message posted on Facebook.

“In a world where the threat of terrorism is a constant reality, the struggle to find that thin line between liberty and public safety is one of the most challenging decisions governments have to make. But it has to be made,” the Speaker added.

It was only over a week ago when Cayetano stood by the House’s swift passage of the proposed Anti-Terrorism Act of 2020, telling critics to read the bill first before lambasting its provisions.

Lawyers, civic groups, and opposition legislators warned the measure could be used to crack down on government dissenters, as it broadens the definition of terrorism while lessening the restrictions on law enforcement agents who would effect these arrests. (READ: EXPLAINER: Comparing dangers in old law and anti-terror bill)

It would allow warrantless arrests of suspected terrorists, their detention without warrant for 24 days, and it would also authorize wiretapping for 90 days.

According to the Speaker, Filipinos should remain wary of those out to “sow fear” whenever they seek to protect the freedoms they enjoy.

“In protecting our freedom, we must also beware of those who sow fear among our people. It is right to be vigilant to abuses, but it is wrong to see a conspiracy behind every action of government. This is not the path to freedom, but to anarchy and lawlessness,” Cayetano said.

Cayetano’s lengthy Facebook post was riddled with references to the Bible and God. He ended his post by urging the public to continue the discussion on freedom in the commments section.

This is in stark contrast to the Independence Day message of Vice President Leni Robredo, who called on Filipinos to fight for their freedoms because a threat to one is a threat to all. Robredo defeated Cayetano in the 2016 vice presidential elections.

Independence Day this year was marked by widespread protests against the anti-terror bill that pushed through even if the Philippine National Police and the Department of Justice warned protests are “temporarily banned.“

The controversial anti-terror bill is already with President Rodrigo Duterte, who could either sign the bill into law or veto it. He may also opt to do nothing and just allow the bill to lapse into law 30 days after receiving it from Congress. – Rappler.com