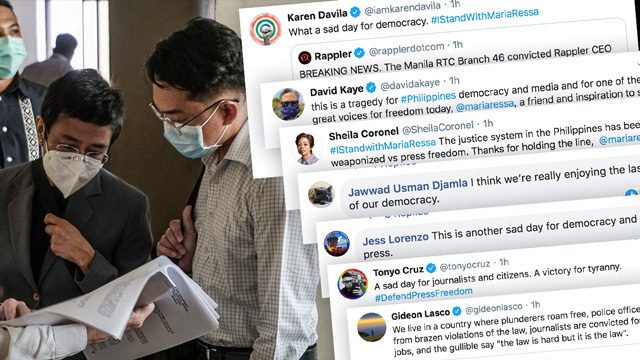 The court sentenced Ressa and Santos to 6 months and 1 day to up to 6 years in jail. However, Ressa and Santos need not go to jail as the conviction is appealable all the way to the Supreme Court.

The cyber libel charges were filed by businessman Wilfredo Keng over a 2012 story written by Santos which raised questions about his links to former chief justice Renato Corona. (TIMELINE: Rappler’s cyber libel case)

The full decision can be accessed here.

Outrage over the verdict was swift, as Filipinos took to social media and stated the decision was “trampling on democracy.”

A number of Filipinos admitted they weren’t surprised by the verdict, but were still upset over the stifling of the free press.

Are we even surprised?

I'll say this again: I hope this law and this verdict comes back to bite all you enablers in the ass when the tables are turned someday.

#DefendPressFreedom, #HoldTheLine, #IStandWithMariaRessa, #CourageON, and Rappler also trended on Twitter on the day of the decision. Many Filipinos encouraged Ressa, Santos, and all other journalists to press on in the fight for the truth.

The Duterte government once again makes it clear that they want to destroy press freedom at all costs. #IStandWithMariaRessa #HoldTheLine #Philippines https://t.co/EyCOZRdM4t

#IStandwithMariaRessa The justice system in the Philippines has been weaponized vs press freedom. Thanks for holding the line,  @mariaressa @rapplerdotcom

#IStandwithMariaRessa The justice system in the Philippines has been weaponized vs press freedom. Thanks for holding the line @mariaressa Today we celebrate your continued courage #HoldTheLine #DefendPressFreedom #CourageON