SC: Congress only has one seat in JBC

Apr 16, 2013 5:59 PM PHT
Facebook Twitter Copy URL
Copied
The SC rules with finality that JBC should only have 7 members, not 8 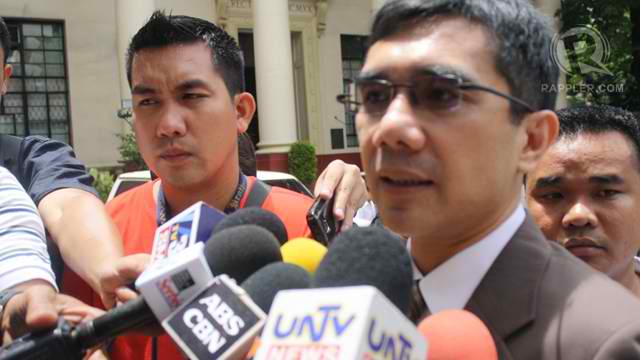 BAGUIO City, Philippines – The Supreme Court on Tuesday, April 6, upheld an earlier ruling limiting the number of congressional representative in the Judicial and Bar Council to one.

The SC, voting 9-3-3, junked the motion for reconsideration filed by Iloilo Rep. Niel Tupas and Sen. Francis Escudero. The SC earlier ruled in July 2012 that the JBC – the body that vets and screens aspirants to the judiciary – should only have 7 members instead of 8. Congress should then be represented by one lawmaker and not by two, with one each from the Senate and the House of Representatives.

Dissenting were Justices Mariano del Castillo, Roberto Abad and Marvic Leonen. Chief Justice Maria Lourdes Sereno inhibited from the voting because she chairs the JBC; Justice Presbitero Velasco Jr also inhibited from the case because he is a consultant to the body. Justice Arturo Brion also took no part.

Leonen said both the Senate and the House of Representatives must be represented in the JBC because, “This is the Constitution’s mandate read as a whole…Any other interpretation diminishes Congress and negates the effectivity of its representation in the Judicial and Bar Council.”

With the ruiing, the JBC must decide who would they retain in the body – Tupas or Escudero.

It was former Solicitor General Francisco Chavez who questioned the 8-member composition before the SC in July.

One of the candidates then for the post of chief justice, Chavez said he could not submit himself to the deliberations of a body whose composition is unconstitutional.

The SC ruled in his favor, saying that the 1987 Constitution clearly specified in Sec.8 Article VIII that “a representative of Congress” shall be one of its ex-oficio members. Representatives from the Senate and House of Representatives sat on the JBC alternately then.

The SC said that that this was altered in 1994, however, when an 8th member was added, as two representatives from Congress sat simultaneously in the JBC, casting a vote of 1/2 each. In 2001, each representative was allowed to cast one full vote.

The SC said though that there is no need to have two representatives from Congress in the JBC because the reference to it as a bicameral body “refers to its primary function in government which is legislation.”

Congress should also act as a bicameral body when exercising its powers of appropriation, declaration of the existence of a state of war, canvassing of electoral returns for the President and Vice President and impeachment.

“An inter-play between the two houses is necessary in the realization of these powers causing a vivid dichotomy that the Court cannot simply discount,” the High Court said.

The SC said the same does not apply in Congress’ functions in the JBC, however.

“There is clearly no interaction between the two houses in their participation in the JBC. No mechanism is required between the Senate and the House of Representatives in the screening and nomination of judicial officers,” the SC said.

“Hence, the term ‘Congress’ must be taken to mean the entire legislative department.” – Rappler.com