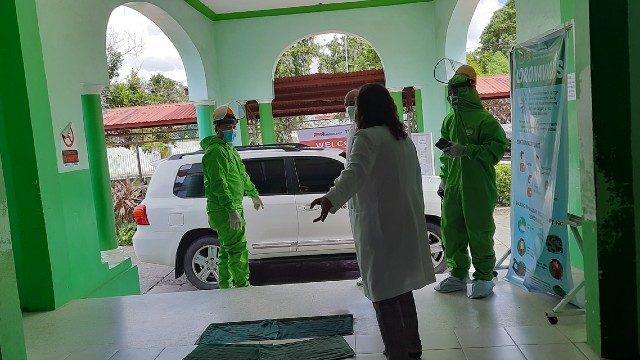 The test results of 4 other health workers from the Leyte Provincial Hospital also came back positive.

The affected staff members are a mix of doctors, nurses, nursing assistants, among other workers.

The EVRMC is the end-referral hospital for COVID-19 patients in the region.

The hospital announced the closure of its emergency department on Tuesday, until further notice.

Minerva Molon, regional director of the Department of Health-Eastern Visayas, said that they will disinfect the hospital during the closure.

The 22 hospital workers were among the 59 new cases in the region announced on Tuesday. Fifty-two (52) of those were from Leyte alone.

Many of the new cases are residents who were stranded in the cities or overseas Filipino workers (OFWs) who were allowed to come back to their hometowns under the Balik Probinsya and Hatid Probinsya programs.

Balik Probinsya is a program of the national government meant to help those working in the cities or ex-OFWs go home to their provinces for good. Beneficiaries of this program get a cash allowance and livelihood assistance in addition to transportation back to their towns.

Leyte was one of the pilot provinces of the recently-suspended program.

Residents who flew in or came by bus to Eastern Visayas from Metro Manila and Cebu were supposed to be tested before leaving the cities, but many of those who were tested in Leyte still yielded a positive PCR result. (READ: Disorganized repatriation program puts E. Visayas rural healthcare at risk)

Prior to the arrival of residents through the Balik Probinsya and Hatid Probinsya programs, Leyte province only had two coronavirus cases on April 24. Both of the cases were from Burauen town.

The entire Eastern Visayas recorded a total of 264 coronavirus cases as of Tuesday. Most (195) of the cases are in Leyte.

Eiver Villegas is a student journalist from the University of San Jose Recoletos in Cebu City. He is currently in Leyte where he is originally from.