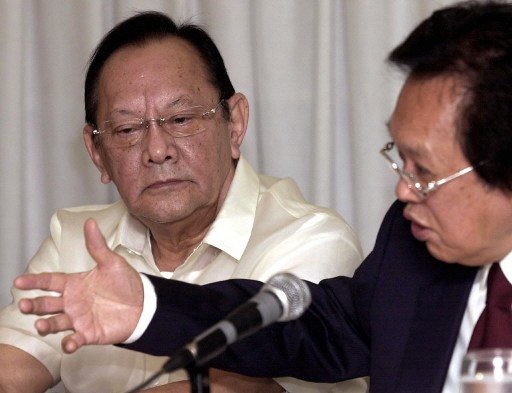 “We are deeply saddened by the passing of Mr Eduardo ‘Danding’ Cojuangco, Jr., at the age of 85,” said Presidential Spokesman Harry Roque in a statement on Wednesday, June 17.

“The Palace offers its fervent prayers for the eternal repose of the soul of Mr Cojuangco as we convey our heartfelt condolences to his family, colleagues, friends, and loved ones,” he added.

“Ninong Danding was a larger than life figure whose colorful life shaped the course of our history,” said Nograles.

“His wisdom and business acumen will be sorely missed. His verve for life will continue to inspire those he leaves behind,” added the Duterte Cabinet member.

“SMC has provided livelihood opportunities to tens of thousands of our countrymen as direct workforce, and creation of additional jobs as suppliers, distributors, retailers, and the like,” said Roque.

The Palace also recognized SMC’s contribution to efforts to curb the spread of COVID-19.

“In these trying times, Mr Cojuangco’s SMC has been a reliable partner of the government in mitigating the impact of the COVID-19 by providing support and assistance to frontliners and vulnerable sectors,” said Roque.

In a press release, the company said that it, and businesses under it, have provided P1 billion worth of assistance – including PPEs, disinfectant alcohol, fuel, cash, and food – to communities and frontliners.

Cojuangco’s Nationalist People’s Coalition supported the presidential bid of Senator Grace Poe in 2016 but allied with the “supermajority” in the House of Representatives when Duterte was elected President.

The late political kingpin was also a crony of dictator Ferdinand Marcos, whom Duterte has described as the “best president,” if not for his dictatorship.. – Rappler.com