Mar 18, 2012 4:57 PM PHT
Bedejim Abdullah
Facebook Twitter Copy URL
Copied
"The Muslim 'mistah' had been sparse in the past century but since 1999, we've had Muslims graduating every year" A native of Mindanao, Imam Bedejim now lives in Baguio. He’s currently the Imam at the Philippine Military Academy. His interests are in interfaith, environment, and sports. If he’s not doing his religious duties, you would find him mountainbiking, hiking or birdwatching.

BAGUIO CITY, Philippines – If you happen to be in the vicinity of Florendo Hall and hear the Call to Prayer on a Friday noon, you might think you’re somewhere in Mindanao or maybe imagine that you’re in the middle of a rebel camp hearing such.

Then you realize that you’re actually at Fort Gregorio del Pilar, home of the Philippine Military Academy in Baguio City.

Yes, you will hear the Muslim Adhan at the very halls where many of our leaders have been molded. Those reverberating words simply mean: God is Great, God is Great.

Muslims have always been a part of the Academy’s landscape from the founding fathers of the early years up to the present. The Muslim ‘mistah’ had been sparse in the past century but since 1999, we’ve had Muslims graduating every year. We also have alumni from foreign military academies that are too many to mention.

“Mistah” is how alumni who belong to the same class call each other, derived from the English word “mister.”

The small but active community of Muslims in PMA is now thriving.

The Cadet Islamic Credence Society is the sole Corps Organization composed of Muslim cadets and is supported by Muslim officers and enlisted men assigned at PMA, as well as Peemayers.

I deliver the homily and conduct the Friday Prayers weekly at our Musalla (Prayer Room) at the Florendo Hall, one of the big buildings where cadets live.

We have an allocated lot for a mosque, but our congregation is still too small to necessitate such an edifice. Nonetheless, we are able to fulfill our basic religious duties inside the camp. 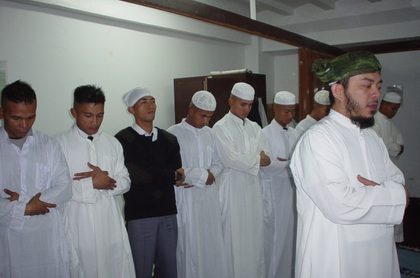 Ramadan and other festivals

Interfaith understanding as well as ecumenical activities are fostered in the Academy. In fact, there are about 7 other small religious groups here.

Cadets are able to pray, fast during the Ramadan, attend Eid Prayers (festivals) as well as visit other mosques in Baguio. And although not required, non-Muslim personnel and cadets are also allowed to observe or attend any of our activities.

We are dutifully accommodated during the Ramadan, and Islamic dietary laws are fully respected.

During the Ramadan, a day starts with prayers and an early meal at around 4 in the morning. It is then immediately followed by the group Fajr Prayer before sunrise. The day is spent in the same way the non-Muslim cadets spend it, except that Muslims are not required to join the Noon Mess, which is a formal duty eating lunch at the Mess Hall (technically the biggest restaurant in the Philippines).

Fasting Muslims are not exempted from academics or physical activity, even the strenuous ones. The Islamic practice of fasting makes one ably strong and not weak.

In the late afternoon, Mess Hall personnel prepare and bring food to the Musalla for the traditional breaking of the fast. Immediately after sunset, we break our fast with fruits or sweets and drinks, pray Maghrib (Sunset Prayer), and then have our dinner. In between, we have lectures or talks on Islam.

Ramadan nights are capped with Isha (Night Prayer) and Qur’an Readings. Then we part ways, and the Muslim cadets join their own Companies (cadet groupings) for the study period or other cadet activities.

We also bring the cadets every Saturdays of Ramadan to 4 different mosques in Baguio so they could join other local communities in these age-old Islamic traditions and also get to know and become closer to the people they’re going to serve in the future insha’allah (God willing).

During Eidul-Fitr (Feast of Breaking the Fast) and Eidul-Adha (Feast of Sacrifice), our cadets are brought to the Burnham Park to join the Baguio Muslim community in prayer and celebration. We also conduct our annual Eid Family Picnic where we invite friends and families, both Muslims and non-Muslims, for a day of celebration. This is usually done on the immediate Sunday following Eidul-Fitr.

On March 17, the PMA Graduating Class “Bagwis” of 2012 had their Baccalaureate rites which, aside from the thanksgiving prayers, features the Bible and Qur’an Giving rites. This is the formal event of bestowing a bible or a Qur’an, as the case may be, according to the person’s religious affiliation.

In his speech, PMA Superintendent Maj Gen Nonato Alfredo Peralta Jr stressed the supreme importance of taking Divine Guidance in military life. Indeed, our own faith will guide us through life, and even beyond death.

On March 17, cadets joined the parade, the awarding, the dunking and many other graduation activities. Saturday, March 18, was the formal Graduation Day and the culmination of the efforts and sacrifices of the Bagwis class.

This year, we have 2 graduating Muslim cadets: Benjamin Allip from Jolo, Sulu, and Zaldy Pil-o from Buguias, Benguet.

While Cadet Allip is a Tausug, Cadet Pil-o is actually a Cordilleran, a Kankanaey. He embraced Islam during his cadetship, although it must be emphasized that there is no missionary activity in the Academy and proselytizing is not allowed.

Aside from exercising their religious freedoms, our cadets are among the brightest of the Filipino youth and they have access to knowledge through the Internet as well as the PMA Library.

Through the years, we’ve had Muslim cadets from the Ilocos, the Visayas as well as other regions of the country. This only shows the spread of the faith. Whether Balik-Islam or born Muslim, we are one in faith. And we are one with the rest of Team PMA in upholding the Honor Code.

Next year will be the turn of PMA “Puddang Kalis” Class of 2013 to graduate. Puddang Kalis in the Tausug dialect means “Sacred Sword,” and this class has the highest number of Muslims graduating by percentage: 7 Muslim graduates out of a class of 121 cadets.

We don’t really dwell on these numbers but rather on their significance to our country and people. If we want our nation to progress forward, we need to ask everyone in this boat to do their part in the rowing, so to speak.

What a beautiful way to realize this by starting with our future military leaders.

Indeed, the PMA motto of courage, integrity and loyalty is the common ground by which we could come and work together. For these are values revered in our own respective religious traditions.

Moreover, the Academy has become the breeding ground of respect, unity and harmony.

If you want to see a harmonious and vibrant community of Filipinos living and sharing together, visit the Academy and you will have a glimpse of the future. – Rappler.com