Magramo-Nakatani title clash to push through in August, KO likely

Jun 22, 2020 9:02 PM PHT
Roy Luarca
Facebook Twitter Copy URL
Copied
Both Giemel Magramo and Junto Nakatani are knockout specialists and fired up to stop one another for the vacant WBO flyweight crown 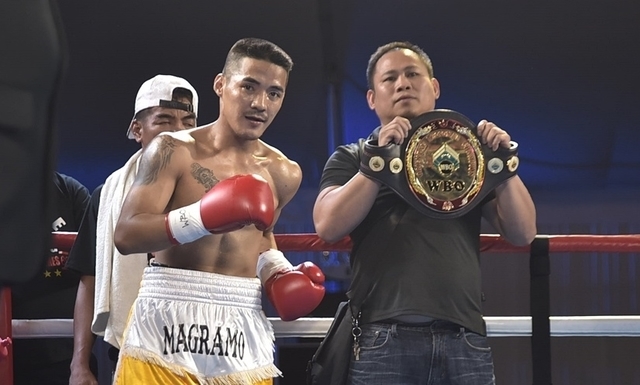 MANILA, Philippines – Do not expect the title duel between Filipino Giemel Magramo and unbeaten Japanese Junto Nakatani on August 21 to go the full route.

Both are knockout specialists and fired up to stop one another for the vacant World Boxing Organization flyweight crown at Korakuen Hall in Tokyo.

The bout has been stalled 4 times by the coronavirus pandemic, affecting the boxers’ training pattern as well as their mindset.

Liza Elorde, who manages Magramo with husband Johnny, however believes the postponements will not be advantageous for one of Japan’s brightest prospects.

“We are affected, of course, but I am sure they also adjust based on the schedules,” Elorde said. “Anyway, Giemel is always ready as he trains daily because his house is just walking distance from our place.”

Magramo resides at the Fourth Estate Subdivision near the Elorde Sports Center in Parañaque.

According to Elorde, it is unlikely the Japan Boxing Commission (JBC) will move the fight again as another boxing card is set on July 22 to signal the resumption of boxing in the country.

Originally set on April 14, Magramo-Nakatani was moved to June 6, July 4, and then August 1.

“All they (JBC) wanted is for us to be in Japan two weeks before the fight,” Elorde said.

Magramo has stopped his last 7 opponents, while Nakatani has knocked out his last 3, including former world champion Milan Melindo in the 6th round.

Standing 5-foot-7 1/2, Nakatani is over 3 inches taller and longer than Magramo, who is being trained by his father Melvin, a former victim of eight-division world champion Manny Pacquiao.

This will be the third foreign stint for Magramo after losing to Pakistani Muhammad Waseem in South Korea in 2017, and stopping Chinese Wenfeng Ge for the WBO international flyweight belt in China in 2019.

Nakatani is tougher than Ge, but Magramo is determined to bring home the crown. – Rappler.com