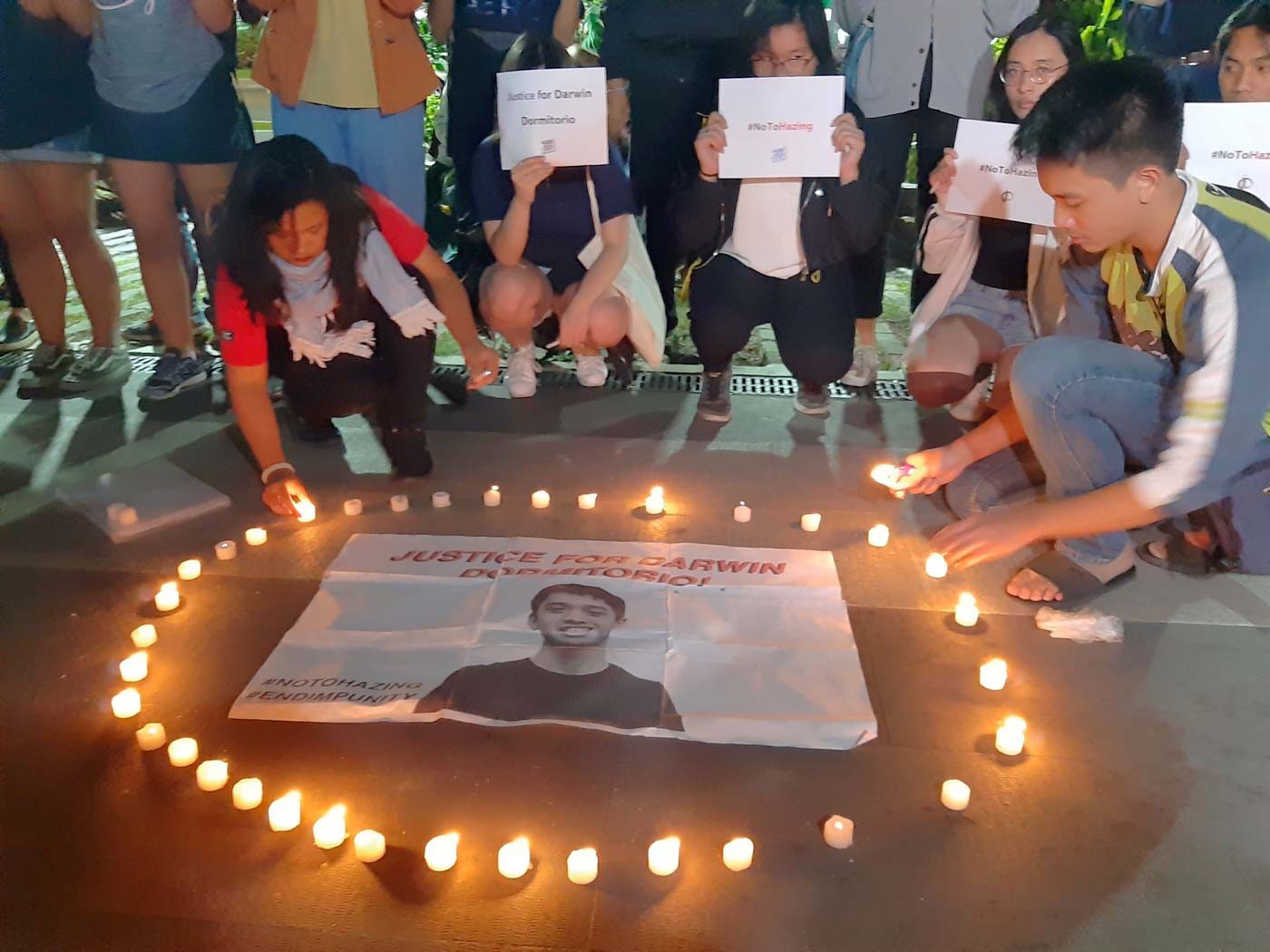 Facebook Twitter Copy URL
Copied
Baguio prosecutors rule that although the doctors are not 'co-conspirators,' past cases support an indictment of murder 'by indispensable cooperation through acts of negligence'

Cadets Shalimar Imperial and Felix Lumbag Jr were indicted for murder – they were the two PMAers who were described to have tormented Dormitorio on several occasions in a span of two months, including on the day before his death on September 17.

Prosecutors found that the doctors failed to give proper medical attention to Dormitorio who went to the hospital after another morning beating on September 17.  The plebe was discharged after being diagnosed with urinary tract infection.

The 20-year-old Dormitorio would be found without a pulse in the wee hours of the morning on September 18.

“Lumbag  and Imperial are principals by direct participation having taken direct and personal part in the infliction of severe injuries upon Dormitorio; and because of their indispensable part in causing the eventual death of the cadet, Doctors Apostol, Candelaria, and Beloy are principals by direct participation —here, being a co-conspirator is not necessary; furthermore, a person can become a principal by indispensable cooperation through acts of negligence,” said a June 5 resolution signed by Baguio Assistant City Prosecutors Margarita De Guzman Manalo and Edwin Brian Sagsago.

Lumbag, Imperial and Cadet Third Class Julius Carlo Tadena were also indicted for the violation of the anti-hazing law.

Murder and anti-hazing law violations are not bailable. It was not clear as of writing whether charges have already been filed in court, and whether warrants were already out. (READ: Darwin Dormitorio’s lifelong dream was to join the PMA)

Lumbag and Imperial first beat up Dormitorio on August 19, which sent the young cadet to the hospital for 8 days.

Lumbag was ordered suspended, and then separated from service over this incident in a decision made on September 16, but it had to be approved by a higher officer first.

On September 17, Lumbag and Imperial again beat up Dormitorio until he died on September 18.

The prosecutors found no probable cause to indict for dereliction of duty the higher officers in PMA because of the law’s limited coverage to “public officer who has a duty to cause the prosecution of, or to prosecute, offenses.” (READ: PMA chief resigns over death of cadet Darwin Dormitorio)

Lumbag and Imperial were indicted of hazing because prosecutors said the two were “undoubtedly the cause of the repeated beatings of Dormitorio over the known period between August 20, 2019 and September 17, 2019.”

On the evening of September 17, after Dormitorio had already taken a beating that morning, Tadena entered the room and tasered the young cadet.

“This use of taser/stun gun/ electroshock device appears to have been regularly used by upperclassmen upon plebes. This, in addition to forcing Dormitorio and his fellow plebes kiss each other lasciviously, which appeared to be foolish considering that none of the plebes appear to be homosexually oriented,” said the prosecutors.

“However, while Dormitorio suffered second degree burns on his genitals, such injuries could not have caused the death of Dormitorio. Tadena is therefore liable for hazing separately and his liability is that under Section 14 (b) of RA 11053,” said the prosecutors.

Zacarias repeatedly kicked Dormitorio after his morning beating on September 17, when the former caught the latter sleeping in his bed and using the blanket.

But prosecutors Manalo and Sagsago said Zacarias’ “actions were borne directly out of his own rage or emotions and cannot be considered as having conspired with Imperial and Lumbag to further Dormitorio’s hazing.”

It was worth noting that a death of this nature has resulted in the indictment for murder. In past fraternity-related deaths, the indictments have mostly been for hazing.

For there to be a crime of murder, there must be – among other elements – treachery and taking advantage of superior strength.

Prosecutors found that there was treachery and abuse of superior strength because Lumbag and Imperial were not only Dormitorio’s upperclassmen but his buddies.

“A plebe, whenever called by an upperclassman is under strict obligation to comply with an order; he is in no position to question his upperclassman. Thus when the plebe is subjected to a ‘katay,’ he is already in a position that he is not to defend himself if he is actually maltreated, much less question the propriety of the ‘katay‘ done on him,” said the prosecutors.

Citing past Supreme Court cases, the Baguio prosecutors said “it was even ruled that as long as the initial attack was treacherous (or for that matter, abuse of superior strength), there may be murder qualified by treachery even if there was no intent to kill.”

As for the indictment of hazing, Imperial had argued that the hazing law does not apply because the element that hazing should be a prerequisite for admission to the organization was not present.

Imperial said hazing was not a requirement of the PMA.

The prosecutors disagreed, saying that if Dormitorio and other plebes wanted to remain in the PMA, they “must endure all the beatings.”

“By all accounts, the practices which the law outlaws were in fact performed upon Dormitorio – a plebe who must endure such practices or rites for a particular duration in order to continue being a member of the cadet corps of the Armed Forces of the Philippines,” said the prosecutors.  – Rappler.com