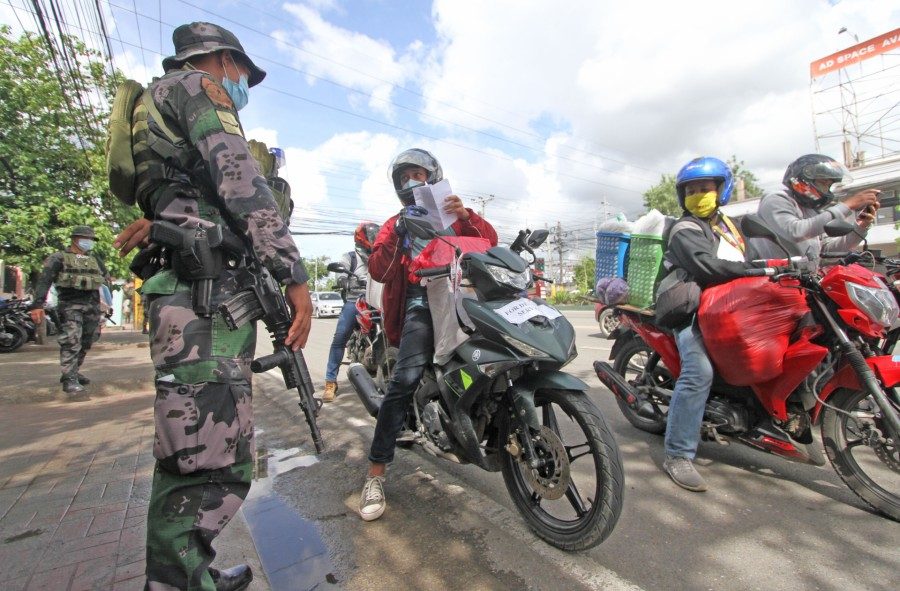 Facebook Twitter Copy URL
Copied
Over 90 checkpoints sprout across the city. The ex-military general inspects the most affected barangays from the sky.

CEBU CITY, Philippines – Helicopters could be heard hovering over the city almost all week.

President Rodrigo Duterte had sent him to lead a battle against a virus that continues to hold this city hostage, even as other areas in the country have begun to relax their quarantine restrictions.

The troops followed the general – military and police checkpoints sprouted like mushrooms all over the city. Some places made the city seem like a war zone, or a city under siege.

At least 150 more cops, including an undisclosed number of Special Action Force (SAF) troopers, have already arrived in the city. Other police from Eastern Visayas, Western Visayas, Bohol, and Siquijor have arrived to help enforce the citywide lockdown. Over 90 checkpoints have been set up in the city since Cimatu arrived.

Despite the increased police and military presence, Malacañang said it wasn’t “martial law” in Cebu.

“Normally, we have the police enforcing it, but if the police is not enough, then the Armed Forces can also enforce the lockdown,” Presidential Spokesperson Harry Roque said earlier in the week. A University of the Philippines study published in early June showed that the COVID-19 reproduction number in Cebu City, which is at 2, is twice that of Metro Manila’s 0.96. The reproduction number, used to measure the transmission potential of a disease, is the ratio of rate of infection and recovery rate.

The number of coronavirus cases have been spiking for the past 3 months even with the city government’s targeted mass testing program, the months-long lockdown of several barangays, and COVID-19 patients in quarantine centers for weeks. The total number of cases in Cebu City was at 4,479 as of Thursday afternoon.

The first action taken was to revoke the city’s quarantine passes – without warning – on Tuesday night, causing a lot of confusion.

A food delivery driver told Rappler on Wednesday, June 24, that he was stopped and was almost fined for having a non-professional license, a rule he never had to deal with until then. A BPO company driver had to show additional documents to make it to the IT Park in Lahug.

The spokesperson of Cebu City Mayor Edgar Labella later said in a livestreamed address on Thursday that new quarantine passes would be distributed  to over 178,000 residents by Friday, June 26.

While the people in the city were left with many unanswered questions, Cimatu initially sought to find some answers about the high COVID-19 cases here by getting a bird’s eye view of the city.

During his first press conference early in the week, Cimatu said he would “go down to the barangays” and talk to the captains. But before going to the barangays, he inspected these areas by air first.

“I looked at the landscape from the helipad of the Noah where you can see Barangay Mambaling. This is really the epicenter of Cebu City as far as the virus is concerned. The homes are really close together,” Cimatu told reporters after the inspection. “This might be the reason why the virus spread fast there.”

He was referring to Sitio Alaska, a high-density neighborhood with over 32,000 residents. The sitio had already been on lockdown since May 7. Food shortages have been reported in the area, although the city government insisted that it had been providing for residents who are unable to leave their homes.

Meanwhile, as hospitals began to get filled to the brim, doctors said the problem called for a solution based on science and medicine. The President, however, pinned the blame on no one but the Cebuanos themselves. (READ: Cebu doctors urge local governments ‘not to downplay virus’)

Cimatu made the announcement in a Zoom conference with Manila-based reporters.

These barangays have the highest number of cases in Cebu:

There are no instructions yet on how to enforce the lockdown on these barangays, but Mayor Edgar Labella said that they did get “inputs” from the barangay captains.

“They [the barangay captains] are our hope in taking Cebu off of ECQ,” Cimatu said in Filipino in a separate statement.

Despite the entourage and big names from the President’s Cabinet who had been here this week, the NTF had yet to announce any major policy changes as far as the Cebu outbreak was concerned.

With the coronavirus death toll in the city doubling to 100 in just a week, many netizens in this city are asking the same question: Can the police and military pulverize the contagion with their longarms and tanks and stop the deaths from accelerating further?

Despite multiple attempts to ask the task force and local government units what the new strategy was, they only said they would come up with one soon.

On Friday, retired Major General Melquiedes Feliciano, task force deputy implementer, said they would have a new plan ready by the end of the month. So far, what they know was that if the numbers go down, the lockdowns would be granular lockdowns – by sitio, street, building or house – instead of citywide.

Until then, Cebuanos would have to wait for the next surprise. – Rappler.com