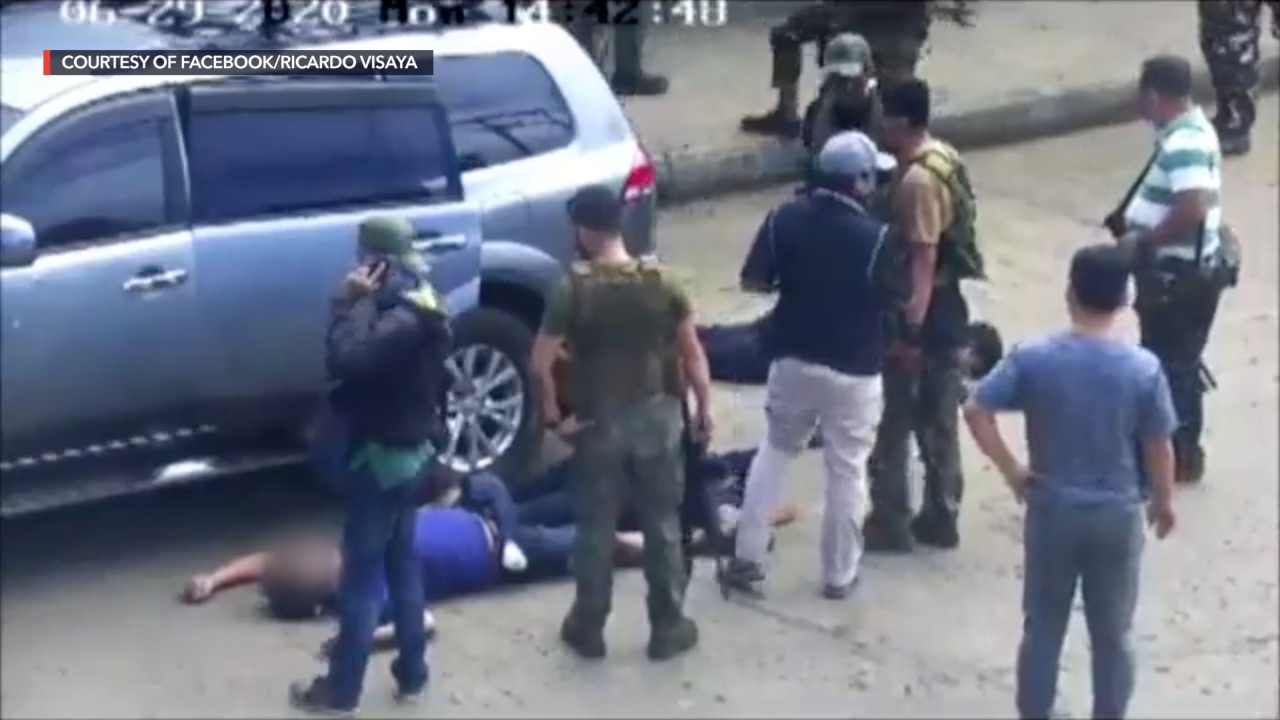 Visaya on Wednesday afternoon posted on his Facebook page what appears to be CCTV footage of the aftermath of the incident on Monday, June 29.

The video, reposted above, showed what looked like police investigators loitering in the crime scene, touching the bodies of the victims, opening the door to the driver’s seat of the soldiers’ SUV, and appearing to reach for something inside.

“See how the local PNP (Philippine National Police) in the area handled the situation. Many violations were committed at the crime scene,” Visaya said in the caption he wrote for the video.

Police are supposed to immediately cordon off a crime scene to preserve it as closely as possible to the moment the crime happened. Any change to the scene might tamper with evidence.

“How could you serve and protect the people if you have policemen like them? Discipline eroded!” Visaya said.

The former military chief then criticized the PNP leadership, referring to its headquarters, Camp Crame in Quezon City. “There have been ‘habitual violent incidents’ perpetrated by unscrupulous policemen. PNP at Camp Crame should stop covering up [for] their abusive men,” he said.

“If you cannot instill discipline in your organization, it’s time for you to go! Have delicadeza (sense of propriety),” Visaya added.

On Thursday, July 2, however, the Philippine Army clarified that the men in the CCTV footage Visaya shared were not policemen but soldiers. Having been on standby as part of the same operation as the 4 victims, more than a dozen Army troopers rushed to the crime scene after hearing the gun shots, to check on their dead comrades.

Army spokesperson Colonel Ramon Zagala admitted lapses in the way the soldiers handled the crime scene. An Army operative whose brother was one of the victims handled the dead man’s body, and appeared to take objects from its pants pocket and from inside the vehicle.

The PNP on Wednesday sacked the chief of police of Jolo.

An Army general, Visaya was President Rodrigo Duterte’s first military chief, from July 1 to December 7, 2016. He is currently chief of the National Irrigation Administration.

On Monday afternoon, July 29, 9 policemen accosted 4 soldiers of the Army’s intelligence unit on a roving mission in Jolo to track down suspected Abu Sayyaf bombers. At a checkpoint in Barangay Bus-Bus, the cops asked the plainclothes soldiers to join them going to the Jolo municipal police station to verify their identities, according to a military report.

When the soldiers drove some 50 meters past the police station, they stopped and one of them, Major Marvin Indammog, alighted to talk to the police tailing them. Then the cops shot him and his men, the military report said.

The police report of the incident referred to the soldiers as “unidentified armed male persons.” It claimed the soldiers tried to drive away after passing the police station, and pointed guns at the cops when they were cornered.

The police claimed they fired in self-defense, which resulted in a gunbattle that killed the soldiers.

On Tuesday, June 30, Army chief Lieutenant General Gilbert Gapay disputed the police’s claim, saying the incident was not a “misencounter” but a “rubout” and “murder.” He cited CCTV footage and eyewitness accounts, including from other incognito Army personnel.

The AFP backed Gapay’s assertion but said it would defer to the probe by the National Bureau of Investigation.

Gapay pointed out the police’s mishandling of the crime scene, saying it should have been cordoned off right away. Instead, the police who shot the soldiers ran off. – Rappler.com