‘The demise of democracy’: Filipinos denounce signing of anti-terror law

Jul 3, 2020 7:58 PM PHT
Gaby Baizas
Facebook Twitter Copy URL
Copied
Many Filipinos on social media express their distress over the new law, which lawyers and human rights advocates fear the government can use to silence critics MANILA, Philippines – President Rodrigo Duterte signed the controversial anti-terrorism bill into law on Friday, July 3, giving the executive branch more power to act against persons and groups considered as terrorists and those supporting them.

The anti-terrorism law will effectively repeal the 2007 Human Security Act, law enforcers considered too weak to use against terrorist, and which human rights lawyers failed to have the Supreme Court strike down as unconstitutional. (EXPLAINER: Comparing dangers in old law and anti-terror bill)

The bill was already met with great opposition when it was passed in Congress on June 3. The House adopted the Senate’s version of the bill, which was passed earlier this year in February. Duterte certified the bill as urgent.

Filipinos spoke up against the bill after it hurdled Congress, and underscored the need for dissent in a healthy democracy. (READ: House of terror: How the lower chamber let slip a ‘killer’ bill)

On Friday evening, Filipinos reiterated their strong disapproval of the signed measure. #OUSTDUTERTENOW, #VetoTerrorBillNow, and #JunkTerrorLaw topped Twitter’s list of trending topics in the Philippines. 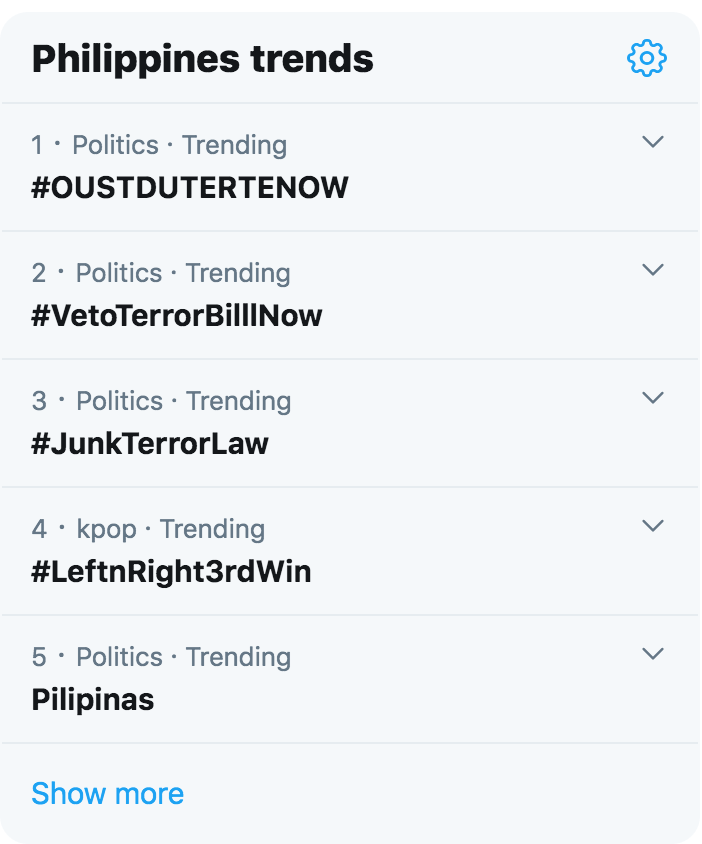 Many Filipinos questioned the government’s priorities and the timing of the law, as it was approved in the middle of the coronavirus pandemic.

Coronavirus cases in the country breached 40,000 the same day the law was signed.

We had our HIGHEST single-day number of positive cases TODAY.

And the government's response is to sign the terror bill. https://t.co/3R7Ioo2uMe pic.twitter.com/ucl3345boa

the Philippines currently has 40,000+ confirmed cases, why was this the priority? https://t.co/UdUEPvRTaD

Why didn't you even consider to reject the bill?? We want mass testing not mass arresting. Imagine we already have 40k cases of COVID-19 in our country and everyday it keeps on increasing. We want cure not the ATB. https://t.co/jOG4rAD0le

Other Filipinos admitted they weren’t surprised by the signing of the law, as they expected such from a strongman like Duterte.

What do we expect? You really can see that thie President's priority is not you my fellow countrymen but himself. Little did you know that terrorism, for this gov't, is defined, depending on what your stand is to this gov't.

A number of netizens juxtaposed this with China’s recent passing of the Hong Kong security law. The law, which took effect on July 1, gives Beijing jurisdiction over “very serious” national security crimes in a move to control the city after months of widespread pro-democracy protests. (READ: Hong Kong national security law: 5 key facts you need to know)

The Anti-Terrorism Bill, that has similar draconian and repressive provisions with China's National Security Law, was signed into law just today! Both passed within the same week.

Can you recognize the pattern? Duterte is imitating China. #JUNKTERRORBILL

Some on social media mourned what they called “the death of democracy,” as human rights advocates previously warned the law could be used to stifle government critics.

This year will be the death of democracy, I guarantee it.

Here’s what other Filipinos had to say about the law:

What are your thoughts on this development? – Rappler.com