‘For law and order in troubled times:’ Guevarra declines ‘last’ chance for SC

Jul 5, 2020 6:18 PM PHT
Lian Buan
Facebook Twitter Copy URL
Copied
'This opportunity comes at a time when my services as Secretary of the Department of Justice are most needed' 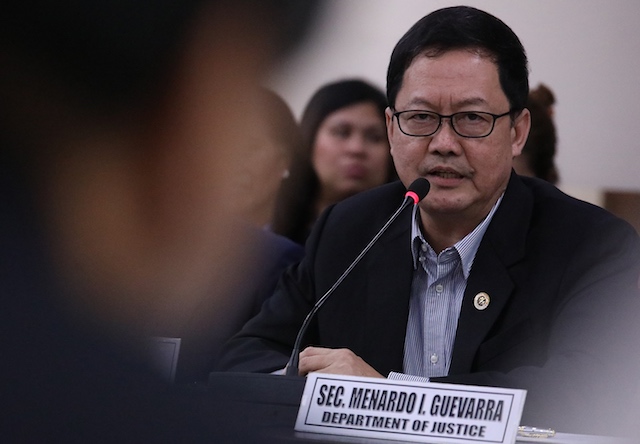 MANILA, Philippines – Justice Secretary Menardo Guevarra has turned down what could be his last chance to be nominated to be a Supreme Court justice, saying that his services are most needed in these troubling times where “law and order must be preserved and maintained.”

Guevarra sent a letter on Saturday, July 4, to retired Sandiganbayan Justice Raoul Victorino who nominated him once again to the Supreme Court for the vacancy that will be opened when Associate Justice Jose Reyes Jr retires in September.

“It is unfortunate, however, that this opportunity has come at a time when my services as Secretary of the Department of Justice are most needed,” Guevarra told Victorino.

“It is therefore with utmost regret that I respectfully decline your nomination,” said Guevarra.

‘For law and order’

This may be Guevarra’s last chance to apply for the Supreme Court because of newly-promulgated rules of the Judicial and Bar Council (JBC) where nominees have to serve at least 2 and a half years, or therefore, must be 67 years and 6 months old.

“Your nomination has again opened a path for me to pursue this dream, and this may very well be my last chance to go for it, considering the new rules on appointment,” Guevarra said.

Guevarra said he is staying with the DOJ especially in “troubled times.”

“The government is facing a huge and unprecedented crisis occasioned by the COVID-19 pandemic, and it is especially during these troubled times that law and order must be preserved and maintained,” said Guevarra.

Guevarra and the DOJ

Guevarra and the DOJ are under scrutiny for the newly-signed anti-terror law, which will face heavy oppositions before the Supreme Court for provisions that threaten fundamental freedoms.

Guevarra will sit in the anti-terror council and the DOJ will write the Implementing Rules and Regulations.

The DOJ submitted a recommendation to President Rodrigo Duterte although it is unknown what the department’s position was because their review is covered by executive privilege.

In quite a surprising move before the United Nations Human Rights Council, Guevarra announced that the DOJ now heads a panel that will reinvestigate 5,655 ‘nanlaban‘ deaths in police anti-drug operations, shattering the police claim that these operations enjoy presumption of regularity.

But human rights groups criticized this panel as no more than a damage control. Guevarra said groups should “credit people in government with good faith.”

The JBC rules on age limit has constitutional issues because the 1987 Constitution only requires that a member of the Court be at least 40 years old. It doesn’t require an age ceiling.

There has been no known challenge to that rule since its promulgation in May.

Asked if he has totally said goodbye to his aspirations of being a justice of the Court, Guevarra said: “No. I’ll keep the flame of my flickering hopes alive.”

Legal and political circles are abuzz with certain individuals who are eyeing Guevarra’s position as Secretary of Justice. (READ: A tale of two justice secretaries: The De Lima-Guevarra balance)

In an interview over GMA News’ Unang Hirit, Presidential Spokesperson Harry Roque was teased who would become new secretary, to which he replied: “May the best man be appointed to the DOJ.”

Asked for his reaction, Guevarra brushed it aside and said: “The one who made the statement should be the one to explain.” – Rappler.com