Jul 9, 2020 8:47 AM PHT
Sofia Tomacruz
Facebook Twitter Copy URL
Copied
'To the travelers who might get stuck like me, don’t be afraid or don’t be ashamed to go public with the problem. You have to make the situation known…because I believe this is a violation of my rights,' says Estonian Roman Trofimov 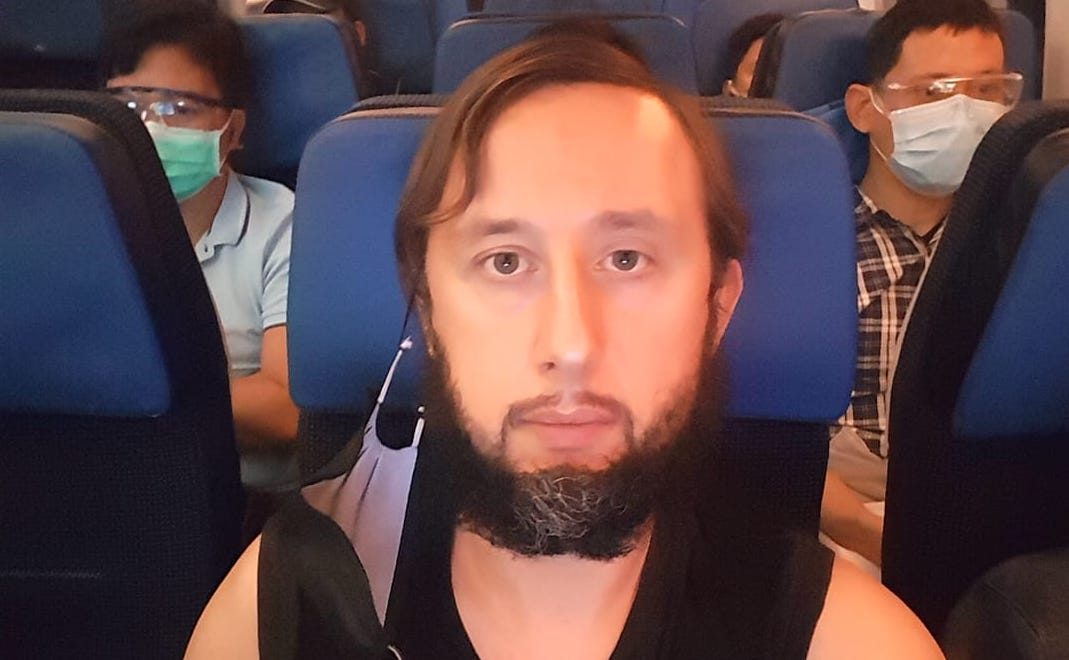 MANILA, Philippines – Only a flight an hour and a half long separated Estonian Roman Trofimov from the end of his vacation, a trip he had spent nearly a year saving up for.

Wanting to take a break from his daily routine, Trofimov had considered traveling to Thailand or the Philippines for a chance to distance himself from Estonia, whose bustling city life had left him feeling tired and stressed out.

He settled on Cebu after weeks of doing research, and purchased a ticket for a flight from Russia to Thailand, and later Manila.

But Trofimov would never get past the immigration gates of the Ninoy Aquino International Airport (NAIA) Terminal 3, after arriving in the Philippines on March 20.

The Philippine government had closed the country’s borders to foreigners in an effort to stem the spread of the coronavirus, which by then had escalated into a pandemic. And what he had hoped would just be a few days’ wait stretched into 110 days in limbo.

Trofimov finally boarded a plane back to Estonia on Wednesday, July 4.

Speaking to Rappler from the Schiphol airport in Amsterdam, where he waited for a connecting flight to his country, Trofimov recounted his ordeal waiting weeks to know when he could return home.

“For the first weeks, (there) was terrible lack of information. I didn’t know why I was there. I arrived as a tourist and I was thrown on the floor and (told) I can go nowhere. I can’t return (to Estonia) and I cannot fly out to other countries. I didn’t understand what was going on. I’ve been treated very harshly,” Trofimov said.

In several Facebook posts, Trofimov documented his ordeal, going as far back as his first night in Manila when he went through Immigration and passport control.

“What kind of passport is this?”

“What state are you a citizen of?”

“Through what country and what time did you fly?” the immigration officer at NAIA asked.

“During his insensitive questioning, I felt like a second-class person or a refugee who came to the Philippines to ask them for alms,” Trofimov said in a post.

After the questioning, he was told by the airport and airline authorities that he would not be able to enter the country, as his flight to Cebu had been canceled and he had no place to stay in Manila.

“The thought flashed in my mind, maybe I landed by mistake in the USA. What kind of frightening…difficulties are there for a tourist from the EU to get to the Philippines?” Trofimov said.

As Trofimov no longer had business in the country, he was told his only options were to go back to Thailand or Estonia – both nearly impossible as international flights had ground to halt.

Left with nowhere to go, Trofimov suddenly found himself stranded in NAIA. After spending about a week in NAIA Terminal 3, he was transferred to NAIA Terminal 1 where he was given accommodations at the passenger lodging facility.

Immigration officers had initially told him his airline, AirAsia, would be responsible for taking him back to Estonia.

Without any flights available, he roamed the empty halls of the airport in search of airport and airline employees who might give him answers to when he would be able to leave the country.

“It was really painful emotionally and also physically because I have a disability…. My back hurts all the time, and you know emotionally it was very difficult to bear cause I had to stay in a tiny room in the terminal. I never go outside to see the sunlight or fresh air,” Trofimov said.

Like Trofimov, thousands of foreign tourists were also left stranded in different parts of the Philippines due to quarantine restrictions.

But where other foreign tourists had the assistance of the Department of Tourism, Department of Foreign Affairs, and local government units in securing transportation to airports and flights home, there were no clear rules for those stuck in airports.

Help, Trofimov added, only came after he decided to publicize his ordeal, prompting Estonia’s embassy in Japan to take notice. What followed were weeks of back and forth between the embassy and Trofimov, who sent out emails through fellow stranded passengers’ laptops.

Trofimov’s efforts would later pay off as his embassy informed him on July 6 that he would have a flight out by Tuesday, July 7.

“I just want to say, to the travelers who might get stuck like me, don’t be afraid or ashamed to go public with the problem…. You have to make the situation known…because I believe this is a violation of my rights and people shouldn’t be quiet about that,” he said.