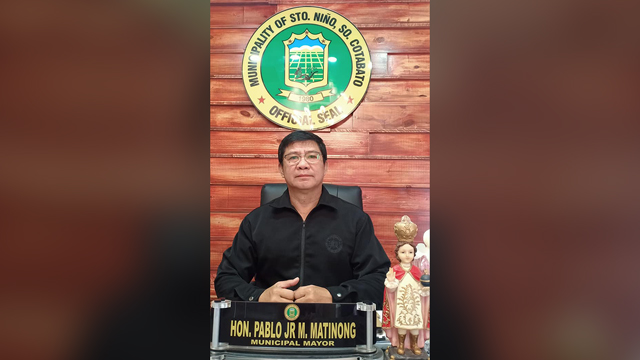 Sto Niño police said in a report that the 55-year-old Matinong was walking alone as he checked a road concreting project in his twn when two motorcycle-riding men in face masks appeared and shot the mayor twice in the head.

Police said the suspects moved away but then returned to shoot the victim again, then fled the scene. A female bystander was hit on her left shoulder.

The victims were rushed to Dr Luntao Clinic and Hospital in Sto Niño but Matinong was declared dead on arrival. The 42-year-old bystander is undergoing medical treatment, said police.

Police said they are tracking down the suspects in coordination with other authorities.

Matinong is among the politicians that President Rodrigo Duterte had publicly accused of involvement in the illegal drug trade two months before the 2019 elections.

Citing “public interest,” the President in March 2019 released the names of 44 people he alleged were “politicians connected with narco-politics in their respective areas.”

Duterte had said that he released the list as the people had the “right to choose leaders who are competent, able, honest, and who are not criminals.”

Matinong had denied his involvement in the drug trade, and said his inclusion in the list was politically-motivated. He won by a landslide over independent candidate John Villarin.

In 2017, Matinong was among the mayors who were stripped of their supervisory powers over police for alleged corruption and involvement in the drug trade.

No drug charges were filed against Matinong, the latest local official in Duterte’s drug list to be killed by unknown gunmen.

In 2018,  Mayor Antonio Halili of Tanauan City, Batangas, was sniped during their city’s flag-raising ceremony in broad daylight. – With reports from JC Gotinga/Rappler.com