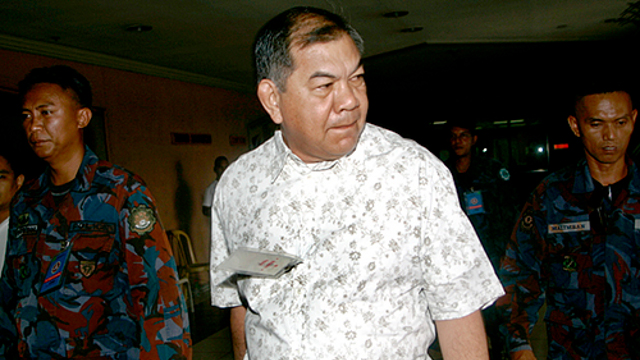 MANILA, Philippines – The lone Sandiganbayan justice who dissented in a decision approving the plea bargain deal between the Ombudsman and retired Maj Gen Carlos Garcia has raised an alleged irregularity in the way his colleagues reached the verdict.

Sources close to the court told Rappler that Associate Justice Oscar Herrera Jr confronted his fellow justices last week about how the 5 justices of the special division that tackled the plea bargain deal were chosen. On this basis, he is considering filing a complaint against them before the Supreme Court, the sources added. On April 10, the Sandiganbayan Special Second Division sustained the validity of Garcia’s controversial plea bargain, in exchange for the withdrawal of the plunder and anti-money laundering charges filed against him. In that ruling, the Sandiganbayan also junked with finality the motion for reconsideration filed by the Office of the Solicitor General (OSG) to set aside the plea bargain.

The 2011 deal allowed Garcia to plead to the lesser offenses of indirectly bribery and facilitating money-laundering. It led to the quick downfall of Ombudsman Merceditas Gutierrez, who quit in May 2011 before the Senate began her impeachment trial. Previous attempts to remove her for allegedly failing in her duty as Ombudsman failed. (Read: Garcia: How the big fish got away)

Herrera was the lone dissenter in the division’s decision. He argued that since the government through the OSG is questioning the deal, it should already be nullified. It was the government, after all, through the Ombudsman, that signed the deal with Garcia in the first place, he added.

He was outvoted. The justices who ruled in Garcia’s favor were Associate Justices Samuel R. Martires, Teresita V. Diaz-Baldos, Roland B. Jurado and Alex L. Quiroz. They said the Ombudsman presented weak evidence against Garcia, and the deal at least ensured that government would get something from him. (Read Herrera’s dissent below)

Martires, Diaz-Baldoz and Herrera are the regular members of the Second Division. However, when Herrera disagreed then with the division’s initial decision backing the plea bargain deal, the court had to form a special division to hear the case. (Sandiganbayan rules state that in case the 3 regular members of a division fail to reach a unanimous decision, a division of 5 shall be constituted.)

Thus, Jurado and Quiroz were brought in to break the impasse.

Here’s what happened though.

A judiciary source close to Herrera told Rappler that 5 days after the court issued its final ruling favoring Garcia, Herrera discovered that Jurado and Quiroz were only handpicked by Presiding Justice Villaruz to join the Special Second Division.

Herrera believes this violated the anti-graft-court’s internal rule that such designation should have been made through a raffle, the source added. The Sandiganbayan’s internal rules state that the Presiding Justice should designate by raffle the two other members of a special division of 5.

In an April 15 en banc meeting, Herrera raised this point, questioning it as highly irregular, according to the source who spoke on condition of anonymity. The source said a heated discussion between Herrera and another justice ensued, almost leading to a fistfight.

Quiroz confirmed in a phone interview that an April 15 en banc meeting was indeed held and that Herrera questioned the division’s composition. But he stressed there was only a “polite” exchange of ideas on the matter.

In the en banc meeting, Villaruz explained that he decided to appoint Jurado and Quiroz to the division — instead of holding a raffle — since the two were already familiar with the case. Both Jurado and Quiroz were part of the five-man special division that initially deliberated on the bail petition of Garcia, also in the Second Division.

In that bail motion, retired Justice Edilberto Sandoval, who was then the presiding chair, and Quiroz, were outvoted by Diaz-Baldos, Martires and Jurado in the verdict to deny Garcia’s temporary liberty. (With the retirement of Sandoval on June 20, 2011, Diaz-Baldos and Martires were joined by Herrera in the Second Division.)

Pressed further, Villaruz flatly said that there was a raffle — in effect denying the information we received. Then he cut short the interview.

But Quiroz himself admitted that no raffle took place. He explained that he and Jurado were appointed by Villaruz because the latter was only following the tradition in the anti-graft court.

By appointing him and Jurado, Quiroz said Villaruz may have considered the sensitivity and the high-profile status of the case . “We are already familiar with the case. A new justice (chosen by raffle) who is not familiar with a case will have to vigorously study the case again and study all the voluminous documents,” he said.

But new court rules no longer allow this tradition in the case of the creation of a special division of 5.

The raffle of cases in the Sandiganbayan is a fairly new practice in the court. Until 2002, it was the Presiding Justice who designated a justice on a rotation basis in case of a vacancy in a division. He also designates the members of the special division in case it is called for.

But in October 2002, the anti-graft court adopted its revised internal rules, which included the raffle system as among the procedures in filling up a vacancy or in the distribution, assignment and consolidation of cases, as well as in the appointment of the two justices that will comprise the Special Division of Five.

Rule VIII on the Rendition of Judgment and Final Order states that in case a unanimous vote is not obtained in the division level, “the Presiding Justice shall designate by raffle and on rotation basis two Justices from all the other members of the Sandiganbayan to sit temporarily with them, forming a Special Division of Five Justices….”

The raffle, according to a Sandiganbayan justice, is meant to temper the powers of the presiding justice and prevent him from unduly affecting the resolution of a case. It is also intended to devolve work among the justices. The raffle system is also observed in the Court of Appeals and the Supreme Court.

The source close to Herrera told Rappler that the justice was so frustrated with the turn of events that he considered retiring early. Herrera is President Benigno Aquino IIIs third appointee to the anti-graft court. His term expires in 2024 yet.

Herrera initially wanted to file an administrative complaint against his colleagues for supposed violation of the anti-graft court’s internal rules, Rappler gathered. But he was advised instead by a colleague to report the matter to the High Tribunal for appropriate action.

Desite the plea bargain deal, Garcia is still in jail in Muntinlupa over his failure to declare to his military bosses that he was a US green card holder while serving the institution. – Rappler.com