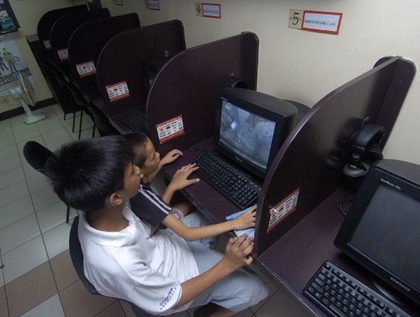 MANILA, Philippines – A man has been stabbed to death in Manila following a row between two groups of men playing the popular shooting video game ‘Counter-Strike’, police said Wednesday, March 21.

The quarrel between the men playing the game — in which gamers playing either terrorists or anti-terror officers try to kill their opponents — erupted in an Internet cafe, police investigator Noel Ibanez said.

The teams had bet P300 ($7.15) on the outcome of their competition on Monday, but when one side won an argument broke out over payment, said Ibanez.

A member of the winning team, still angry over the dispute, later followed losing player Eric Cristobal to his home and stabbed him to death, he added.

“He (Cristobal) did not start the quarrel. He just got caught up in it. But they all had long been betting on Counter-Strike,” said Ibanez.

The suspect was arrested by police on Tuesday.

Internet cafes are very popular in the Philippines, mainly among young people who pack into them to play computer games, often for hours on end. – Agence France-Presse