Mar 22, 2012 3:19 PM PHT
Agence France-Presse
Facebook Twitter Copy URL
Copied
In a letter to the UN's International Maritime Organization, North Korea said the second stage of its latest rocket was expected to splash down 190 km east of the northern Philippines 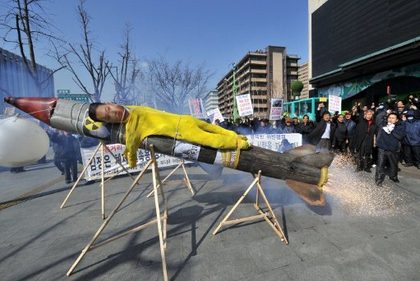 MANILA, Philippines (AFP) – The Philippine government said Thursday, March 22, it anticipated US help to track a North Korean long-range rocket, part of which is expected to land off the Philippines.

“Of course we need the help of the United States to monitor the path because we don’t have that capability,” Defense Secretary Voltaire Gazmin told reporters.

“But with our alliances, we will be provided with the necessary information. We should know the details so that we will know how to inform and warn our people who will be in the (rocket’s) path,” he said.

North Korea announced last week it would launch the rocket to place a satellite in orbit between April 12 and 16, insisting it was for peaceful space research.

But the United States and other nations see the launch as a disguised ballistic missile test, and say that it would breach a UN ban on North Korean missile launches.

A previous North Korean long-range rocket in 2009 flew over Japanese territory and the boosters landed safely in waters off Japan.

In a letter to the UN’s International Maritime Organization, North Korea said the second stage of its latest rocket was expected to splash down 190 kilometers (118 miles) east of the northern Philippines.

The first stage of the rocket would fall about 140 km off South Korea’s west coast, in international waters between China and the South, the letter said.

On Wednesday, the Philippine government joined its US and South Korean allies in criticizing North Korea’s planned launch, calling it “unacceptable”.

“The Philippine military is ready to coordinate with its US counterpart in the monitoring of the planned launch,” the Foreign Department said in a separate statement. – Agence France-Presse