Mar 24, 2012 11:00 AM PHT
Natashya Gutierrez
Facebook Twitter Copy URL
Copied
Survey results highlight the weakness of the prosecution too. After resting their case, they convinced only a small number of those undecided about Corona's guilt. 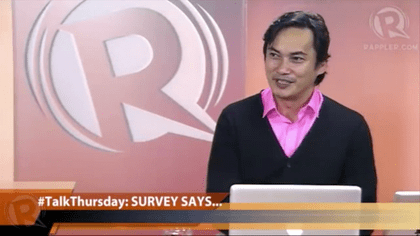 Holmes, political scientist and Pulse Asia president, has conducted national polls for years. Holmes believes it is critical for the prosecution to be able to offer more evidence regarding Corona’s other properties, both in Metro Manila, and if any, possibly in other areas in the country, if they are aiming for a conviction.

“If the Senate doesn’t favor those motions coming from the prosecution, [he may be acquitted],” said Holmes. “They [the prosecutors] are too weak.”

Holmes was Rappler’s special guest for Talk Thursday, which invites prominent figures from various fields every week to speak about current issues.

Recently, Pulse Asia results revealed that Corona is the least trusted top government official with an 11% trust rating, a significant drop from his already low 29% rating in November 2011.

Pulse Asia is a private body that polls public opinion in the country, which helps give a snapshot of the Philippines’ socio-economic and political climate.

The prosecution attributes the 47% who think Corona is guilty to the successful presentation of evidence, which lead prosecutor Niel Tupas Jr had described to be a “good job.”

He pointed out that while 47% of Filipinos believe Corona is guilty, only 15% think he is ‘definitely’ guilty, and the rest think he is ‘probably’ guilty.

Of the 15%, 10% said they formed their opinion during the course of the trial, while 5% believed Corona was guilty even before the impeachment trial started.

This, Holmes said, highlights the prosecution’s weakness: they managed to solidly convince only a small number (10%) after having rested their case.

The survey was conducted after the prosecution presented all its evidence, and before the defense started its presentation.

He admitted that as a political scientist, he was surprised that the prosecution had dropped 5 of the 8 articles of impeachment. While he understood that it was borne of confidence about the case the prosecution had already presented, he called the other 5 articles “equally as important.”

The defense has consistently acknowledged that the task of convincing the public about Corona’s innocence is an uphill battle, considering that it is being tried in two arenas — that of the court and of public opinion.

But they have remained optimistic they will prove Corona is innocent, despite what they described to be “an almost impossible task.”

Holmes seemed to agree that the defense still has a chance to convince the public. “[The results are] not the solid opinion and more importantly…it may sway, it may change — to definitely guilty or innocent,” Holmes said.

Impact of acquittal or conviction

If Corona were acquitted, Holmes said he saw few complications, believing that people would be accepting of the decision and would not cause much of a problem.

“If we have an acquittal, acceptance is something we can say can be generated from majority of the public,” said Holmes. “It will depend largely on the explanation of the impeachment court in regards of an acquittal.”

Holmes said the biggest concern would be the President’s own political capital.

The relatively stable ranking of the President, he said, may be because Aquino has remained unrelenting in at least one part of his promise: to eradicate corruption.

“The President has sought a conviction, and if that is not given, how would people now perceive the power of the president in pursuing [cases of corruption]?” he pointed out, saying it may logically reduce assessment of his capability to do so.

As for a conviction, Holmes emphasized that regardless of what decision the impeachment court may make, the important thing is, the process should be completed because it will show the efficacy of the impeachment process.

“If you talk about institution-building, the first thing you should secure is that institutions fully operate. This is an institution process securing accountability,” said Holmes. “Once completed, at least that secures: this is the way impeachment processes go. These are the things we learned,” he added.

Of those surveyed, 43% are ambivalent about Corona’s innocence or guilt.

The defense has questioned the timing of the release of the results, but remained hopeful the results would not condition the minds of the people over the 6-week long break, or even have an impact on the decisions of the senator-judges.

Holmes countered, “I don’t think it necessarily has to have an influence on an institution process whose rules are quite well-defined,” he said.

He does not foresee the results affecting the decisions of senator-judges, especially the 6 who scored high in trust ratings.

While they may lose some points, he does not believe the public will hold them accountable for a decision they make regarding Corona.

Holmes did say however, that for some senators, voting to convict or acquit could be more problematic, especifically for those who made it clear they are crusaders against corruption.

He said the public is extremely sensitive to a sway to either side for those senators. “They will weight that carefully,” he predicted.

The survey results show that 69% of Filipinos believe the senators will be fair in judging the impeachment case, while 22% believe otherwise. The rest are undecided.

No concerns on credibility

Others, including the defense, have also questioned the credibility of the Pulse Asia survey.

Lead counsel Serafin Cuevas raised questions on whether those polled even understood the issues being discussed in the trial, calling the survey “unreliable.”

Holmes, unfazed, called the debate a “non-issue.” He reiterated that the President had nothing to do with the results.

“The President has not in any way been involved in the operations of Pulse,” said Holmes. “We frame our own questions, we release the results regardless, whether it’s commissioned [or not]. In this case it isn’t.” He also emphasized that in releasing these reports, he puts at stake the reputation not only of Pulse, but also of theirs as academics.

Pulse Asia is run by professionals and experts in their respective fields.

He said there is great interest in the impeachment trial. As expected, urban areas especially in the National Capital Region, showed the most interest. There was  marginally higher attentiveness from those in Mindanao, relative to those polled in the Visayas.

“Their knowledge may not be as complete but they basically express an opinion, they had an option not to express it,” said Holmes. “It’s an opinion we should just recognize — whether we disagree or agree [with] it.” – Rappler.com