Jun 1, 2013 9:50 AM PHT
Rappler.com
Facebook Twitter Copy URL
Copied
(UPDATED) The NDRRMC says 5 others are wounded, including a 9-year-old 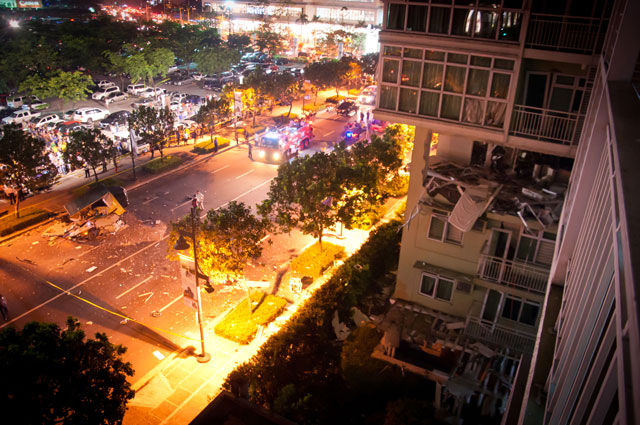 MANILA, Philippines (UPDATED) – At least 3 people were killed in the Serendra explosion in Taguig, Friday evening, May 31, according to a revised report of the National Disaster Risk Reduction and Management Council (NDRRMC) released Saturday noon, June 1.

The NDRRMC withdrew its earlier 8 am report that 3 others were killed, aside from the 3 reported Friday night by the police.

Interior Secretary Mar Roxas corrected the NDRRMC and stressed only 3 were killed.

The only confirmed dead were the 3 passengers of an Abenson delivery truck.

Five others were wounded, including a 9-year old victim.

Based on information from Rizal Funeral Homes, Pasay City, the 3 Abenson employees who died were identified as Marlon Castillo Bandiola, 29, from Cavite; Jeffrey Cunanan Umali, 32, from Sta Mesa, Manila, company driver; and Sallymar Natividad, 41, from Bulacan.

Umali and Natividad were both drivers, while Bandiola was a company assembler.

A strong explosion hit a unit at building B of Serendra shortly past 8 pm Friday, breaking a wall, damaging vehicles, and shattering windows. The posh residential-commercial area is usually packed on Friday nights, and netizens who were having dinner there were the first to report the incident.

The police has done an initial probe of the incident. Serendra insiders have told Rappler that Unit 501 is owned by a foreigner. A Fil-Am tenant is renting it from May 31 to June 9. – with reports from Patricia Evangelista/Rappler.com