Senate? Not for me, says Sara Duterte

Mar 28, 2012 4:37 PM PHT
KD Suarez
Facebook Twitter Copy URL
Copied
Mayor Sara Duterte said she would rather concentrate on Davao City than run for a Senate seat in the 2013 elections 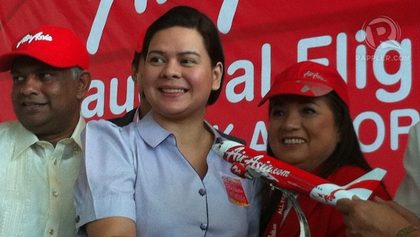 CLARK FREEPORT ZONE, Pampanga – The Senate is out of the question for Sara Duterte.

The Davao City mayor said that she would rather concentrate on the city than run for the Senate in the 2013 elections.

“Our family is commited to serving Davao City. Mahirap kasi iwanan ang lugar namin (It’s hard to leave our city),” she told Rappler during the launch of AirAsia Philippines at the Diosdado Macapagal International Airport on Wednesday, March 28.

Duterte was among the first passengers of the maiden Clark-Davao flight of AirAsia Philippines, the newly-launched local unit of Asia’s largest low-cost carrier.

She said they still have to map out their local election strategy, including filling up a whole slate from mayor to the representatives of the city’s 3 districts to Congress.

“Actually, wala pang final plans (there are no final plans yet). We’re just formalizing the formation of the political party right now,” she said, referring to the local Hugpong sa Tawong Lungsod party, which is the current affiliation of most city officials.

“We hope that it would turn out well, para maipakita natin ang rule of law (so that the rule of law prevails),” she said. – Rappler.com