Apr 2, 2012 11:53 AM PHT
Facebook Twitter Copy URL
Copied
From the legal and the political, prosecutors and defense counsels turn religious in arguing the Corona impeachment case 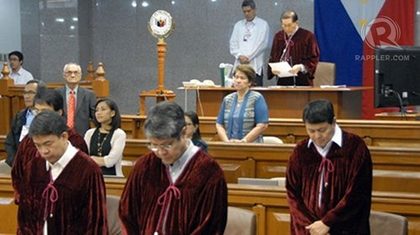 MANILA, Philippines – They used up the legal arguments and political theories. Days before the Holy Week, prosecutors and lawyers of Chief Justice Renato Corona were waxing religious.

In keeping with the Lenten season, the prosecution and defense panels declared an “impeachment ceasefire.” Welcoming the respite from the daily trial grind, members of the 2 camps said the Holy Week break would allow them to rest, study, and focus on other matters.

Their reflection, though, still seems to be impeachment-inspired. Lawyers and spokespersons now argue their case complete with references to the Stations of the Cross, and the 7 Last Words.

Here is the “passion” of Chief Justice Renato Corona for the viewing public:

1. The agony in the Senate

Two weeks after the defense began presenting evidence and witnesses, the prosecution complains of pain.

In a press conference in the last week before the trial break, spokesperson Rep Miro Quimbo said the defense presentation tended to divert attention from the Articles of Impeachment to “the minutest of issues.”

Quimbo’s metaphors extended to food and abstinence. He is concerned that public interest in the trial will wane as a result of the supposed delaying tactics of the defense, coupled with the 6-week break. The proceeding has dragged on for 34 days.

“Sa kahit na anong bagay, may usapin ng umay. Kahit nga crispy pata eh magsasawa ka rin.” (In any issue, people will eventually get tired of things. Even if it’s pork knuckles, if you eat it often enough, you’ll get sick of it.)

The prosecution is not the first to speak of an ordeal. Weeks ago, Sen Edgardo Angara already said there is no need to “prolong the agony of our nation.”

2. The sin of Pontius Pilate

While Quimbo invokes public opinion, defense counsel Jose “Judd” Roy III does not want his client condemned before the court of Pontius Pilate.

Roy said the defense counsels knew early on that Corona would face trial by publicity. He explained this was the reason they prefaced his answer to the Articles of Impeachment by harking back to Pilate.

“The sin of Pontius Pilate is not that he exercised his powers, but that he abandoned his judgment, washed his hands and let the angry mob have its way,” reads the first line in the prefatory statement. Roy appealed to senator-judges and the public not to commit the same sin.

3. Crucifixion and death by surveys

Senate President Juan Ponce Enrile adds to the narrative, speaking about the suffering of officials who are crucified in surveys.

“We are administering justice here and the classic case of a survey that was wrong is the man on the cross,” he said. “He was judged by a survey and until now, people are worshipping him.”

Reflecting on his own popularity, Enrile said he does not take too seriously the finding that he garnered the 2nd highest approval rating among the Top 5 public officials.

The defense minister recalled that during Martial Law he was called a butcher and a murderer.

4. Resurrection and the doubting Thomases

Despite the scourging in the surveys, defense counsels believe they have resurrected the name of their client.

Defense spokesperson Tranquil Salvador III said that in the first 2 weeks of presentation, the panel has been able to explain the sources of Corona’s wealth (his salary and allowances), and to clarify which properties are really his.

For example, Salvador said the team showed that the Marikina property was already sold to Corona’s second cousin, bonsai artist Demetrio Vicente, and should no longer be a declared asset.

Still, the spokesperson told the Inquirer it was natural for the prosecutors to remain doubting Thomases.

“We are not surprised if they find the witness not very credible. They are entitled to their own view but it’s not their view or our view that would matter. It’s the view of the senator-judges because they will give the final verdict,” said Salvador.

Whatever religious references the 2 panels use, what is clear is that the last judgment is not yet at hand.

No matter what so-called truce, SMS and e-mail spam blast or exposé will come out of the break, it will take months, more evidence, and deeper reflection for the impeachment court to finally decide.

By then, lead defense counsel Serafin Cuevas’ word will be made flesh. Consummatum est! (It is finished.) – Rappler.com