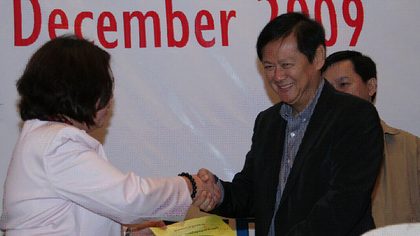 MANILA, Philippines – A former governor of Palawan charged with murdering an environmental activist has rejected calls for his surrender, insisting he is an innocent man.

Joel Reyes released an audio message to followers after a lower court ordered his arrest this week for the January 2011 killing of Gerry Ortega.

“I am hiding… not to avoid justice but to stop the accusations, charges and persecution that have no basis,” Reyes said in the taped message, a copy of which was obtained by AFP.

“We will fight against this,” he said in a local dialect.

Reyes, 59, who still has wide political influence in Palawan, was among 8 people ordered arrested for the murder of Ortega, a veterinarian and radio commentator who had accused the former governor of corruption.

Police arrested the ex-governor’s aide in Palawan on Tuesday, March 27, but the other 7 suspects, including Reyes’ younger brother who is also a politician remain at large.

Police said the handgun used in the Ortega killing was registered in the name of Reyes’ detained aide. The ex-governor is accused of being the ring-leader.

The government has been pressured to act on Ortega’s killing in the wake of frequent criticism by media organizations and rights groups that the Philippines is one of the world’s most dangerous places for journalists.

Human rights workers blame the killings on a prevailing “culture of impunity”, where powerful figures believe they can carry out violent attacks against their critics without being punished.

Reyes, whose wife is the current Palawan vice-governor, alleges he was not given due process. – Rappler.com

From cannabis-infused milk tea to toothpaste: Thai businesses cash in on legalized plant