Apr 1, 2012 10:53 AM PHT
Rappler.com
Facebook Twitter Copy URL
Copied
Filipinos cope with uncertainty by embracing it. It is less about fatalism as it is about a belief – that with uncertainty, there is certainty in a divine presence and plan.

MANILA, Philippines – Religion. We dare not define it. Sociologically, it’s a core of beliefs and practices governing the spiritual aspects of man and is shared by a group of persons.

Beyond the eternal, religion also shapes the material world. Woven into the fabric of man and society, it is a potent, visible, yet unseen factor in our daily lives.

We see that every day. The RH bill, discussions about divorce and the influence of the Church on policy, government, and elections are all very real.

Equally pervasive is how religion is so much a part of Filipino psychology. A component of this too is what has been termed as “fatalistic passiveness,” or bahala na. It hints at surrender to a higher God and His wishes.

As a social force, it is therefore important to situate religion in a demographic perspective.

Pew says the report is “a comprehensive demographic study of more than 200 countries. The report finds that there are 2.18 billion Christians of all ages around the world, representing nearly a third of the estimated 2010 global population of 6.9 billion. Christians are also geographically widespread – so far-flung, in fact, that no single continent or region can indisputably claim to be the center of global Christianity.”

Pew further adds, “Readers should bear in mind that the definition of Christian in this report is very broad. The intent is sociological rather than theological: We are attempting to count groups and individuals who self-identify as Christian. This includes people who hold beliefs that may be viewed as unorthodox or heretical by other Christians. It also includes Christians who seldom pray or go to church.”

Pew prefaces the 130-page report, saying, “In 1910, about two-thirds of the world’s Christians lived in Europe, where the bulk of Christians had been for a millennium, according to historical estimates by the Center for the Study of Global Christianity. Today, only about a quarter of all Christians live in Europe (26%). Pluralities – more than a third – now are in the Americas (37%). About one in every four Christians lives in sub-Saharan Africa (24%), and about one-in-eight is found in Asia and the Pacific (13%).”

Pew’s study shows the Philippines ranked 5th in the world with 86.8 million people who self-classify themselves as Christian. This represents 93.1% of the Philippine population of 2010 and 4% of the world’s total Christian population. The Catholic Church has 1.1 billion adherents worldwide representing half of the global world population.

The Philippines is 3rd among Catholic countries worldwide. Filipino Catholics represent 81.4% of the population and 6.9% of the world’s total Catholic population. The Philippines also has the largest Christian population in Asia (Graphic 6). But given the sheer size of the Chinese population, China’s 67 million Christians is not far behind.

While Catholics comprise the biggest share of Filipino Christians, there is a significant portion belonging to the Protestant denomination.

Equally important is a significant number of “Other Christians” who do not belong to these bigger denominations. Included in this group are Jehovah’s Witnesses and Church of the Latter Day Saints. In the Philippine context, the Iglesia ni Cristo is also captured in this number. 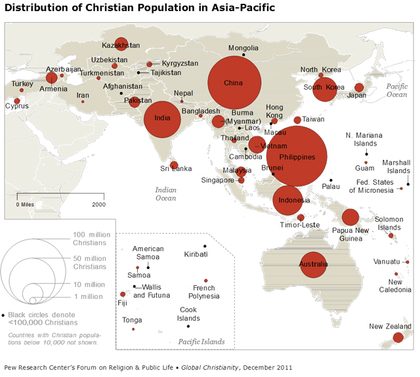 Pew Research highlights the Philippines (and China) in the Asia Pacific section of the Global Christianity report. It reads:

Roman Catholic priests and missionaries began arriving in the Philippines in the 16th and 17th centuries, around the time of the Spanish conquest of the country. The church steadily gained adherents over the centuries. By 1900, nearly three-quarters of the population professed Roman Catholicism.

Spain’s control of the archipelago, which did not formally end until 1898 with the advent of American colonial rule, gave the Church in the Philippines a Spanish cast, particularly in terms of leadership. The first Filipino bishop was consecrated in 1905, and the first Filipino cardinal in 1960. Today, Roman Catholics make up over 80% of the country’s population.

The country also has one of the world’s largest populations of charismatic Catholics. The largest and most visible charismatic Catholic organization in the Philippines is El Shaddai, under the leadership of a layperson, Mike Velarde. Among the largest pentecostal churches and organizations are Church of Christ (Manalista), Jesus is Lord Fellowship, and the Assemblies of God.

Bahala na – this Filipino phrase loosely translates into “Leave it to God (Bathala).” It is said that Filipinos cope with uncertainty by embracing it. It is less about fatalism as it is about a belief – that with uncertainty, there is certainty in a divine presence and plan. – Rappler.com