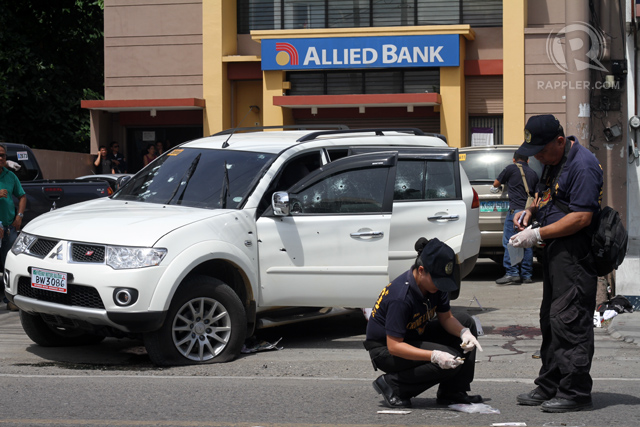 MANILA, Philippines – The Commission on Human Rights (CHR) on Saturday, July 13, said it will investigate a group of police officers who were allegedly filmed executing a criminal.

The video was at odds with a police account of the event in which they said they had killed 3 gangsters, including the suspect allegedly executed, in a shootout on the streets of the southern city of Davao on Thursday.

Rosales has ordered an inquiry into the shooting to determine the officers’ possible criminal culpability, the commission’s spokesman, Mark Cebreros told AFP Saturday.

However, he said Rosales’ comments should not be interpreted literally.

“She (means) the incident merits a closer investigation,” Cebreros said.

Davao police said its officers had shot and killed the 3 gang members in a firefight that led to the rescue of a businesswoman who had been kidnapped by them in Manila a week earlier.

One other suspect was arrested, it added.

However ABS-CBN said the grainy footage showed a uniformed officer using a rifle to shoot a suspect who had his hands behind his head while sitting behind the wheel of a parked sport utility vehicle surrounded by police.

It did not identify the source of the footage, which showed at least five uniformed policemen and another man in civilian clothing standing outside the vehicle.

The channel added a man in civilian clothing later placed an unidentified object on the pavement beside the dead suspect’s vehicle, in what could amount to tampering with the crime scene.

Senior Supt Ronald de la Rosa, the Davao police chief, told the station he had not seen the footage and would defer comment.

However the mayor of Davao, Rodrigo Duterte, defended the police operation and challenged critics to go to court.

“Don’t crucify the police for doing their duty,” Duterte told the station in an interview.

The local press also quoted Duterte as warning that kidnappers would “leave Davao City horizontally or vertically. It’s your choice.”

Duterte, who won a 7th term as mayor of one of the country’s largest provincial cities in last May’s elections, is known for his uncompromising stance against crime.

He has been criticized by human rights groups for allegedly condoning the unsolved, death-squad-style murders of scores of petty criminals during his previous terms as Davao mayor.

“We understand the need of any local chief executive to keep the peace in his jurisdiction or in his area of responsibility. However, this must be done within the bounds of law,” Valte said in a radio interview over dzRB

She added that the police, who could provide security needed by citizens, should not violate the law for the sake of of peace and order. – Rappler.com