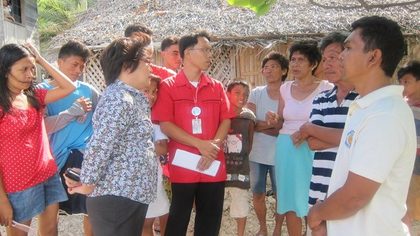 MANILA, Philippines – In the wake of a controversial photo that showed a girl surfboarding on a whale shark (butanding), government agencies in Central Visayas have given assurances that ordinances and guidelines on proper animal treatment and conservation will be followed.

The regional office of the Department of Tourism (DOT) said it will push for a “massive campaign” among residents in the region, particularly in areas where whale sharks appear.

Residents of Boljoon, Cebu, became the subject of online tirades on Sunday, April 1, when photos showing them in close contact with a stranded whale shark circulated on Facebook. Among the photos, it was the one with a woman trying to surf on top of a whale shark that elicited the most negative reaction online. The photos were initially identified to have been taken in Oslob, a town in Cebu that is gaining prominence among tourists for its butanding sightings. But it was later reported that the incident happened in the town of Boljoon, in Barangay Granada.

Judilyn Quiachon of DOT’s Region 7 office explained that the residents meant no harm and that they merely “got excited” by the sight of the butanding.

The whale shark, which was trapped near the town’s shore on March 31, Saturday, never stayed long, and was released by the residents hours after the photos were taken.

“The mayor actually got mad. She made the community promise not to do it again,” Quiachon said. The DOT, as well as representatives of the Bureau of Fisheries and Aquatic Resources (BFAR) and local officials, have already visited the town and taught residents how to handle whale sharks.

According to the World Wide Fund for Nature, the following guidelines should be observed. The residents are said to be apologetic over what happened. The girl who was trying to surfboard on top of the whale, identified as Carelle Listones, was reported to have been traumatized by the incident.

“We need to intensify our campaign in this area,” Quiachon said. The DOT will mount a campaign caravan in the region next month on proper marine conservation.

BFAR is said to be investigating the incident. “We were already able to inform the residents. We’re now studying their case,” said Alan Poquita of BFAR’s Central Visayas office.  – Rappler.com