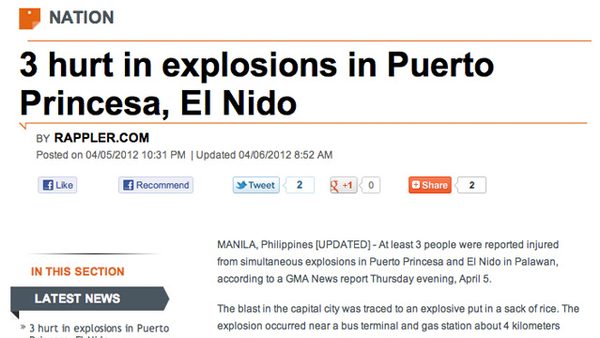 At least 3 people were reported injured when two explosions hit the tourist island of Palawan on Thursday, police reported. No motives could yet be established for the late afternoon attacks, Agence France Presse (AFP) reported. The blast in the capital city was traced to an explosive put in a sack of rice. The explosion occurred near a bus terminal and gas station about 4 kilometers away from the city. Injured were a tricycle driver and his passenger. AFP said the tricycle driver suffered bruises to the forehead and unspecified injuries on the ankle, while his passenger injured her ankle. An earlier blast was reported in the mainland of El Nido, a known resort town, at about 5:30 pm, not in the better-known El Nido Resorts as earlier reported. The blast occurred about 10 minutes before the Puerto Princesa explosion. An explosive was found to have been placed inside a garbage bin in front of Entalula Cottages, a small, mid-priced beachfront accommodation on the northern part of the town proper.

Read the details in Rappler.