Jul 26, 2013 10:24 PM PHT
Facebook Twitter Copy URL
Copied
The goal of the Manila bus ban is to decongest the city's traffic. But along Taft Avenue, where a number of schools are located, students say nothing much has changed 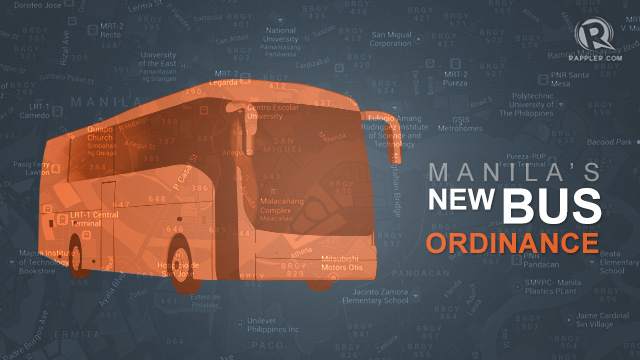 MANILA, Philippines – Kylie Licudine used to take only two rides from her home in Las Piñas to her school in Manila. A tricycle brought her to the bus stop, and then a bus dropped her off across the street from De La Salle University’s gate on Taft Avenue.

In the last 4 days, however, she had been taking more than two rides and experimenting with other routes to take. Manila’s ban on buses that do not have terminals in the city took effect on Tuesday, July 23.

So she gets off further at the World Trade Center, where she has to take a tricycle back to Buendia, and then take a jeepney to La Salle.

Her P250 daily allowance used to be enough, with P92 spent on fares. With the bus ban, she now shells out an extra P41.

Manila City Vice Mayor Isko Moreno acknowledged that commuters from outside Manila are greatly affected by the bus ban, but it caters to the welfare of the majority of Manilans.

Outsiders, he said, should just change their commuter habits, he said in a press briefing on Thursday.

Asked about students’ complaints of having to take additional trips – and consequently have additional expenses – he seemed to be unaware of it.

Along Taft Avenue, however, students said nothing much had changed.

But the scene in the LRT was different during rush hours. Commuters go through long lines and jampacked coaches to get to school and offices.

According to IJ Cacnio, another La Sallian, an advisory from the Office of the Mayor was plastered on buses enroute to Manila a day before the ban started but it was not noticeable and did not attract attention.

(We are not affected by the pros of the bus ban. Even if the traffic is lessened, we’re not going to ride [the light vehicles made available] anyway.)

Moreno urged Manila’s neighboring cities to consider implementing the same ordinance in their jurisdictions, saying it only takes political will to do it.

In a summit, he said, traffic, flooding, and Metro Manila’s “other interlocking problems” can be discussed.

“There are management collaboration issues in an area where operations of 17 local governments sometimes overlap with the work and mandate of national government offices,” Recto said.

He cited how the Metropolitan Manila Development Authority does not know how many bus franchises the LTFRB has given those enroute to EDSA.

He also echoed Moreno’s sentiment that the LTFRB does not consult local governments in giving franchises.

Meanwhile, Licudine from Las Piñas said she can only go through the hassle brought about by the bus ban for one more week. After that, she may have to look for a dormitory along Taft, or be dropped off and fetched from school every day by their car.

Either way is too expensive for her family.

If she had a say, she wants the bus ban to be set aside. Maybe it will be better for Manila to just give certain bus lines alternative routes.

Earlier on Friday, July 26, there were reports that Mayor Joseph Estrada had allowed city buses to enter Manila as long as they loaded and unloaded passengers at the designated areas.

Moreno, however, told Rappler in a text message that this is not true. – Rappler.com