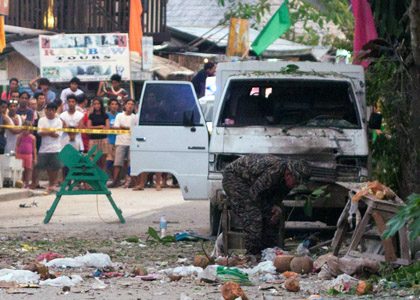 [UPDATED] MANILA, Philippines – It could not have been the work of the terrorist Abu Sayyaf Group (ASG), an Armed Forces of the Philippines (AFP) official said Friday, April 6, about the twin blasts that rocked Palawan at the start of the Holy Week break.

In a text message to Rappler, AFP Western Command chief Lt Gen Juancho Sabban said the bombs that exploded are “not signature ASG bombs.” Instead, Sabban said initial leads point to political motives or activities by the “CNN” – military jargon for Communist Party of the Philippines/New People’s Army/National Democratic Front.

The AFP maintains the communist angle “because of the numerous extortion letters sent by the CNN to business establishments,” Sabban said.

A possibly related issue that has stirred Palawan for the past few days, politically speaking, is the recent order to arrest former Palawan Gov Joel Reyes and 7 others for killing Gerry Ortega, a veterinarian and radio commentator who had accused Reyes of corruption.

Interestingly, Palawan will be a site of Balikatan activities between the AFP and the US military this month too. Philippine and US troops will participate in humanitarian and civic assistance projects in the province as part of the 28th Balikatan joint military exercises from April 16-27, the AFP said in a statement.

The Balikatan is seen as part of the war against terrorism, among other things. In another text message, Department of the Interior and Local Government Secretary Jesse Robredo said Puerto Princesa Mayor Edward Hagedorn has requested the national government to investigate the 2 incidents. “He suspects that (the) motive is local conflict in the area,” Robredo said.

The government has formed Task Force Hunter with police officials to investigate the matter, he added.

Robredo said that based on initial findings, the attack was meant “to alarm (rather) than to harm.” He explained that the explosive devices used in the attacks, for one, included no shrapnels, among other things.

The simultaneous explosions in the Palawan localities of Puerto Princesa and El Nido on Thursday, April 5, left at least 3 persons injured.

Investigators traced the blast in Puerto Princesa, the capital city, to an explosive placed in a sack of rice. The explosion in the mainland of El Nido, on the other hand, was found to have been placed inside a garbage bin in front of a small, midpriced beachfront accommodation.

In a phone interview with Rappler, former El Nido Mayor Leonor Corral described the explosion as very loud, having been heard all over town. Residents initially thought it was only an LPG tank that leaked and exploded.

The explosion happened when most tourists are coming back to the town proper after their island-hopping tours, Corral said.

In his homily, the local priest said El Nido residents should include peace in their Holy Week prayer intentions, noting it is the first time a bomb-related incident like this happened in their area.

Earlier, Robredo said perpetrators meant the blasts to serve as a threat, according to a GMA News report. The report did not elaborate.

Investigation on these incidents is ongoing, said the National Disaster Risk Reduction and Management Council (NDRRMC) in its 7:30 am update.

The NDRRMC has also coordinated with Wescom and AFP “for possible tactical reinforcement,” the agency said.

Bombo Radyo said Palawan is now on “double full alert” after the explosions.

In its travel advisory for its nationals meanwhile, the British embassy made mention of the Palawan incidents. “On 5 April there were two explosions on the island of Palawan, one in El Nido and one in Puerto Princesa. Three people are reported to have been injured, but there are no reports of any British casualties. British nationals in the area are advised to call home to let family know they are safe,” the advisory said. – With reports from David Santos and Lala Rimando/Rappler.com