MANILA, Philippines – The National Union of People’s Lawyers (NUPL) will ask a local court to cite SM Baguio in contempt for refusing to accept an order stopping it from uprooting trees on Luneta Hall in Baguio City.

NUPL, which represented Baguio protesters in seeking the temporary environmental protection order (TEPO) that the Baguio environmental court eventually granted, is poised to file the motion for contempt on Wednesday, April 11.

SM Baguio refused to receive the TEPO issued by the city’s environmental court on Tuesday, April 10, and continued earthballing trees on Luneta Hill.

At 3:30 pm,  the sherif of the environmental court served the TEPO issued by Judge  Judge Cleto Villacorta.

The order was supposed to stop the cutting of trees on Luneta Hill, where SM intends to build a parking facility and an entertainment , dining and retail plaza.

But according to lawyer Christopher Donaal, who was able to speak with the sheriff, the mall guard refused to allow the officer of the court to enter SM.

The guard reportedly told the sheriff that no one from SM Baguio will receive the order of the court as only its lawyers from the Fortun, Narvasa, Salazar law firm in Makati are authorized to do so.

Speaking to Donaal, the same sheriff who furnished SM Baguio a copy of a related complaint filed in February wondered why nobody from the same office received the copy of the order.

The sheriff left the order in the SM premises, informing the mall guard about it. He will file a report that he was able to present the TEPO to SM Investments Corp (SMIC), the main respondent in the case, according to Donaal. 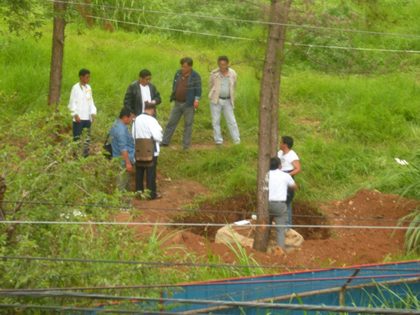 Posting photos on Twitter, protesters claimed earthballing of trees continued despite the issuance of the TEPO.

“It defeats the purpose of TEPO which is a judicial remedy. The rules of court is there to facilitate justice and not to defeat the same,” Daytec-Yangot lamented.

SM Baguio’s refusal to receive the order of the court is “a very clear manifestation of a culture of impunity. They feel they are above the law,” Daytec-Yangot said.

“It would be a paper victory if SM defied the order,” Daytec-Yangot said.

“We feel angry at what SM is doing to Baguio. At the same time, the people are happy people. They are not giving up. Tonight, we will continue the vigil,” she added.

The environmental case filed against SMIC is a first of its kind in Baguio under the new environmental rules of procedure which took effect on April 2010.

TEPO was introduced to facilitate a simplified, speedy, and inexpensive procedure, and enhance access to environmental justice.

NUPL is also planning to file with the environmental court a motion seeking to extend the TEPO on Friday,  April 13, when the TEPO is scheduled to expire.

“As an the alternative, it will also ask the court to immediately grant TEPO which was already heard in recent adversarial proceedings,” Daytec-Yangot told Rappler.

This will keep TEPO in effect while the case is being heard.