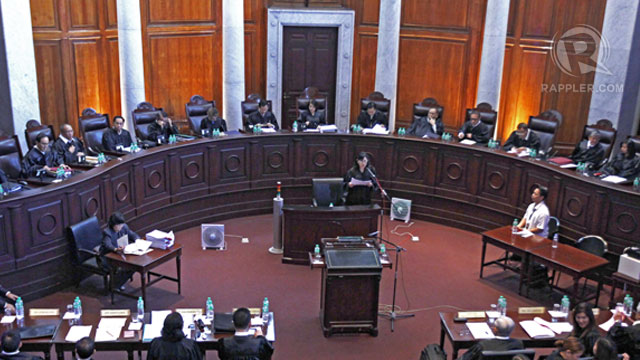 MANILA, Philippines — The fate of the Reproductive Health law is now in the hands of the so-called gods of Padre Faura.

Both camps, the critics and supporters of the RH law, will now prepare their respective memoranda summarizing their arguments. The Court gave them two months — 60 days — to submit their memoranda.

The justices will study these memoranda before scheduling an en banc deliberation and finally rule on the petitions asking the High Court to nullify the law on grounds that it is unconstitutional.

“We don’t really know when the SC is going to come out with its decisions. Normally we will be given a minimum of 30 days [to prepare memoranda]. We will probably ask for more than that so we can prepare for our memorandum very well,” RH law critic lawyer Maria Concepcion Noche told Rappler on the sidelines of the oral arguments.

It’s a numbers game at the end of the day. Both camps are confident they were able to sway the justices to their side.

“We think that the fight is nearing finish line and we will be sustained by the Supreme Court. Finally, the people will reap the benefits of the RH law,” said the RH law’s principal sponsor in the House of Representatives, former Albay Rep Edcel Lagman.

Noche is hopeful. “It is different from lobbying before Congress. This is the last frontier and we are very hopeful that the justices will look into all issues. We keep our fingers crossed,” she said.

On the 5th and final day of the oral arguments, the discussion went back to the question: Does the RH law violate freedom of speech and religion because it disallows Catholic health workers from advising patients against using contraceptives? If the RH services go against someone’s faith, they are required to refer their patients to other health workers.

On Tuesday, Senior State Solicitor Florin Hilbay defended the RH law for more than 4 hours. He argued that the RH law doesn’t violate freedom of speech and religion because Catholic health workers are not forced to conduct RH servies that go against their faith. They have the option to refer their patients to other health workers.

But the biggest debate since Day 1 revolved around the question: Are contraceptives abortifacients? The Catholic Church and the anti-RH bloc insist they are.

“We have always felt that the issue here is about life. This is about right to life from the moment of conception. i think that’s the most important issue and the most compelling issue we brought out and argued,” said Noche.

READ: #RHlaw: We are not doctors, justices say and Justice Abad compares pro-RH petitioners to Hitler

The oral arguments on the RH law were mostly a repeat of the points raised in the last 13 years, the time it took Congress to pass the measure.

“The arguments of the public respondents private intervenors were strongly anchored on the unqueipivocal provisions of law and medical and medical and empirical researches. petitioners based feebly on religious dogma and imagined fears,” said Lagman.

Emotions were just as high at the Supreme Court as they were in Congress.

Catholic practioners argued that contraceptives violate the right to life. RH law advocates however pointed out that the country needs the law to address social issues such as teenage pregnancy and maternal deaths, among others.

Some Supreme Court justices earlier said it will not be an easy decision.

READ: Sereno: SC may not be best forum for RH and Chief justice takes up cudges for RH law

Chief Justice Ma Lourdes Sereno said the High Court may not be the “proper forum” for the petitions seeking to nullify the RH law. She also said the justices may have to exercise “judicial restraint” because the RH law is a policy made by co-equal bodies, the legislative and the executive. — Rappler.com