On the Trillanes case: Who is Judge Elmo Alameda? 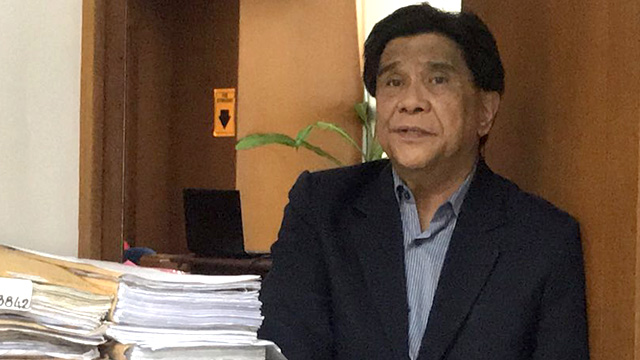 MANILA, Philippines (UPDATED) – The judge who handled the rebellion case against Senator Antonio Trillanes IV and 17 others in relation to the 2007 Manila Peninsula siege is no stranger to high-profile cases.

Makati City Regional Trial Court (RTC) Branch 150 Judge Elmo Alameda is a University of the East alumnus. He was a prosecutor for 16 years and has been a judge for over a decade, according to Clerk of Court Diosfa Valencia.

Alameda was a trial court judge in Tuguegarao City, Cagayan, before being assigned to the Makati RTC in February 2005.

Besides the rebellion case versus Trillanes and the soldiers in the 2007 Manila Peninsula siege, Judge Alameda has handled two other notable cases:

In addition, Alameda issued a search warrant in August against the Time in Manila bar in Makati City. The bar was suspected of selling party drugs to its customers.

The police’s implementation of the search warrant on August 16 sparked a row with the bar’s lawyers. Makati police arrested the lawyers for supposed “obstruction of justice” and later filed a complaint against them for “constructive possession of illegal drugs.” The lawyers maintained they were just monitoring the police’s inventory of the bar.

On November 29, 2007, Trillanes – deemed resigned from the military because he ran and won as senator – together with then brigadier general Danilo Lim walked out of the courtroom during a hearing at Makati City RTC Branch 148.

That day, Trillanes was on trial for earlier coup d’etat charges in connection with the Magdalo group’s 2003 Oakwood mutiny, while Lim was a witness for the defense panel as one of the government’s negotiators.

Moments later, the pair and other Magdalo soldiers took over a hotel in Ayala Center, Makati. The Manila Peninsula siege sought the ouster of then-president Gloria Macapagal Arroyo over corruption allegations.

The group surrendered after government forces stormed the Manila Peninsula. Trillanes, Lim, and 16 others were arrested and sued for rebellion.

Despite rebellion being a non-bailable offense, Judge Alameda in February 2010 granted bail to Trillanes and his co-accused because he found insufficient evidence. Trillanes and the rest of his group, however, remained in jail at the time because of the earlier coup d’etat charges.

Trillanes was given provisional liberty in December 2010, after then-president Benigno Aquino III signed Proclamation No. 75, which granted amnesty to military and police personnel involved in the 2003 Oakwood mutiny, the 2006 Marines standoff in Fort Bonifacio, and the 2007 Manila Peninsula siege. The proclamation also extinguished their criminal liabilities in both the coup d’etat and rebellion cases.

Senator Trillanes, who was granted amnesty in January 2011, was reelected in the May 2013 national elections.

Five years later, in August 2018, President Rodrigo Duterte revoked the amnesty granted to Trillanes. In relation to this, the Department of Justice has filed petitions before the Makati courts to revive the 2003 coup d’etat case (under Branch 148) and the 2007 rebellion case (under Judge Alameda of Branch 150), and issue warrants against the opposition senator.

Luy had reportedly been detained there by his former boss Janet Lim Napoles and her brother Reynald Lim since December 2012. Napoles was tagged as the alleged mastermind of the scandal involving lawmakers’ pork barrel or lump-sum discretionary funds. (READ: Pork Tales: A story of corruption)

Shortly after his rescue, Luy filed a serious illegal detention case against Napoles and Lim.

On April 14, 2015, Judge Alameda sentenced Napoles to reclusion perpetua or a jail term of up to 40 years. Lim, however, remains at large.

The Court of Appeals, however, overturned Alameda’s ruling in May 2017, saying that Napoles’ guilt “was not proven beyond reasonable doubt.”

On January 12, 2007, the body of Rafael de las Alas was found slumped in a chair in the office of former Batangas governor Jose Antonio Leviste at LPL Tower in Makati City.

De Las Alas, Leviste’s long-time aide, had gun shot wounds in the head. Leviste later admitted that he fired at De las Alas, but only out of self-defense.

Initially charged for murder (also a non-bailable offense), Leviste was allowed to post bail in May 2007 by Judge Alameda, citing weak evidence presented by the prosecution.

But in January 2009, Judge Alameda convicted Leviste of homicide, a lesser offense compared to murder, because the death of De Las Alas “did not appear to be premeditated.” The Court of Appeals affirmed Alameda’s decision in May 2010.

In 2011, Leviste made the news again after being spotted near the LPL Tower when he should be serving his 6-12-year sentence inside the New Bilibid Prison in Muntinlupa City.

He was reported to be given special treatment in prison, including a “sleep-out” privilege not allowed in jail management protocol. Five prison officials were dismissed by the DOJ due to the incident. – with reports from Aika Rey/Rappler.com