Resignations under the Aquino administration 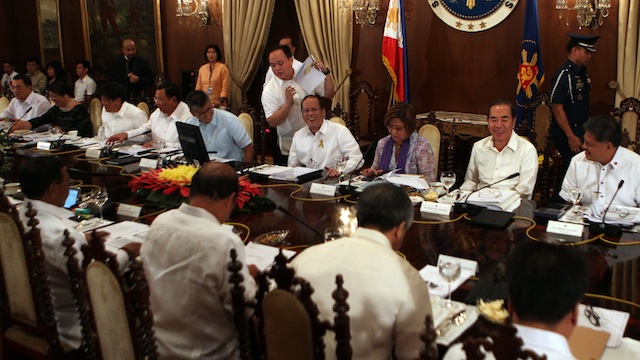 The announcement came almost 2 weeks after the botched police operation in Mamasapano, Maguindanao that killed 44 members of the Special Action Force (SAF). Purisima, who was suspended since December 2014, supervised the operation.

Since 2010, a number of officials under the current administration have stepped down due to various reasons. While most of them pushed through, Aquino declined some of the resignation offers.

April 8 – Deputy Ombudsman Mark Jalandoni resigned after complaints are filed against him, including alleged usurpation of authority.

May 6 – Ombudsman Merceditas Gutierrez resigned after the House of Representatives voted to impeach her. She was replaced by former Supreme Court Associate Justice Conchita Carpio-Morales.

May 30 – Bureau of Corrections Director Ernesto Diokno resigned after the escape of former Batangas governor Antonio Leviste from the New Bilibid Prisons that month.

July 1 – Transportation Secretary Ping de Jesus resigned over disagreements with President Aquino over the handling of a case involving an attached agency’s head. Aquino’s losing running mate Mar Roxas assumed the post, and was later replaced by another party mate, former Cavite congressman Joseph Abaya, when Roxas was transferred to the Department of the Interior and Local Government (DILG).

August 3 – Senator Miguel Zubiri resigned over allegations that he benefitted from wholesale cheating carried out by his party in the 2007 polls.

September 7 – Undersecretary for Peace and Order Rico Puno resigned, saying he wanted “to support the President’s decision to give a free hand to the incoming [DILG] Secretary [Roxas] in forming a new team.”

January 14 – Eduardo Banzon, president and CEO of the Philippine Health Insurance Corp., resigned due to personal reasons. He was replaced by former Health Undersecretary Alexander Padilla.

June 5 – Senate President Juan Ponce Enrile resigned on the second to the last day of the 15th Congress, and laments how his critics in the minority used the Senate fund controversy to destroy his name and derail the senatorial candidacy of his son.

July 12 – Bureau of Immigration chief Ricardo David Jr resigned after various officials complained about his lackluster performance in the agency.

August 2 – Pagasa forecaster Ricky Fabregas resigned for a job in the Republic of Congo in Africa.

September 2 – NBI director Nonnatus Rojas resigned in connection with alleged leaks in the agency on the Janet Lim-Napoles case.

November 30 – Local Water Utilities Administration acting chairman Rene Villa resigned, saying it was a personal decision. His resignation came after he was named as among those present in events organized by alleged pork barrel scam mastermind Janet Lim Napoles.

December 2 – Customs chief Rufino Biazon announced his “irrevocable resignation” 3 days after he is implicated in the pork barrel scam. Biazon said his resignation is not an admission of guilt, but a way to prevent attacks on the Aquino administration. He was replaced by Finance undersecretary John “Sunny” Sevilla.

December 25 – Energy Secretary Jericho Petilla offered to resign after falling short of his promise to energize all Yolanda-hit towns by Christmas eve. But Aquino declined the resignation, citing Petilla’s “excellent” performance after the disaster.

May 9 – Philippine Charity Sweepstakes Office chair Margarita Juico resigned. Sources said Juico quit for several reasons, among them the reported claims of a defeated Liberal Party bet that the position has been promised to him.

July 11 – The president announced that he declined the resignation of Budget Secretary Florencio “Butch” Abad over the Disbursement Acceleration Program (DAP).

December 19 –  Health Secretary Enrique Ona resigned after his name was dragged in the questionable purchase of expensive vaccine. He was initially told by Aquino to take time off to prepare his answers to questions on the issue.

December 23 – Rehabilitation Secretary Panfilo “Ping” Lacson meet with the president to discuss his departure from post-Yolanda reconstruction duties in February 2015. He claimed that his office has already served its purpose.

–with research by Ennah Tolentino/Rappler.com