Typhoon Buwaya: On naming storms after the corrupt 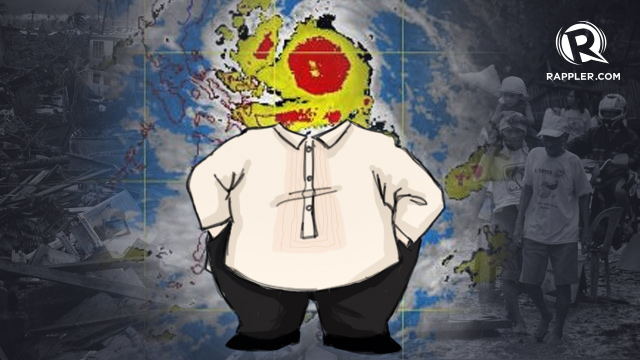 The petition “Pagasa: Start Naming Typhoons After Corrupt Politicians and Grafters” was posted on the website Change.org by Ismael Tomelden of Marikina City on Tuesday, September 3.

It was addressed to the Philippine Atmospheric, Geophysical and Astronomical Services Administration (Pagasa).

Tomelden argued that “the devastation they cause is so great, Mother Nature can’t even compete with them for the destruction of life and property.”

Some online users were amused with the idea:

Netizens were also quick to suggest new names, including personalities and former Presidents who they think are corrupt.

Some names are involved in or connected to the “pork barrel scam” – the misuse of the Priority Development Assistance Fund (PDAF) of senators and congressmen – which continue to make headlines.

@rapplerdotcom we already had one db, typhoon GLORIA

Users in Rappler’s Facebook page also sounded off with their opinions and more name suggestions.

Meanwhile, others expressed their disagreement.

Commenter KawawangJuan1 told online readers to better educate Filipinos instead on voting wisely during elections. “All Pinoys should be informed [instead] of the effects of vote-buying and electing corrupt officials!” he said.

A Twitter user also raised the complexities of this petition:

@rapplerdotcom intentsions were good but i dnt its possible..who will identify? Do we have a convicted list? Else its anther propagnda tool

Here are other dissenting comments from social media:

@rapplerdotcom @mikebueza come on. Its fun but lets be serious because its about our country's future.

@rapplerdotcom @mikebueza Absurd. Neither glorify a crook, nor immortalize a public enemy! Their memory r supposed to be buried in oblivion!

Please no, @rapplerdotcom! Bad publicity is still publicity that can gather votes for these corrupt politicians.

As of 9:30 pm on Thursday, September 5, the petition has collected 1,893 online supporters over two days.

In contrast, the petition to save Mali the elephant in Manila Zoo is close to reaching 75,000 signatures as of this posting. It hit the 50,000-mark on January 9, 2013, according to the petition page. – Rappler.com