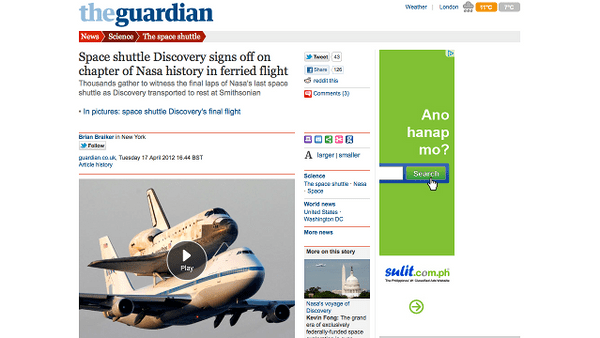 After its last spaceflight in March 2011, the space shuttle Discovery made its last journey Tuesday, April 17, taking off for the last time from the Kennedy Space Center in Florida to its final resting place in Virginia. The shuttle, strapped to the back of a Boeing 747, flew by several US national landmarks, including the Washington Monument and the US Capitol building both in Washington DC, before landing at the Washington Dulles International Airport. The Discovery will not become part of the Smithsonian Institution’s National Air and Space Museum. In its 27-year history, Discovery flew 39 successful missions, logging nearly 143 million miles. Its retirement marks the end of the space shuttle era. NASA is said to be focusing on the development of a next generation space shuttle that can carry astronauts farther into outer space.

Read more on The Guardian