Sep 28, 2013 4:21 PM PHT
Michael Bueza
Facebook Twitter Copy URL
Copied
(3rd UPDATE) The election period has started for the 2013 barangay elections. Get to know what activities are banned and more information about the Oct 28 polls

The day has been declared a special non-working holiday by Pres. Benigno Aquino III through Proclamation No. 656.

The post of barangay captain and seats in the Sangguniang Barangay (barangay councils) are at stake in 42,028 barangays across the country. A total of 54,051,626 registered voters are expected to cast their votes.

The smallest administrative unit in the Philippines, barangays provide frontline government services to Filipinos, especially those in far-flung areas.

Outgoing SK officials will have to relinquish their posts after their terms end on November 30, due to a “no holdover” stance by Congress. Also, no temporary appointments to SK will be made.

The election period began on Saturday, September 28 and will last until November 12, which is 15 days after the polls.

Here are other important dates in this year’s barangay elections:

Comelec, through Resolution No. 9715, put in place guidelines on the conduct of the polls.

Be aware of these rules, because on the first 11 hours of the election period alone, 2 civilians – one each in Calaca, Batangas and Roxas City, Capiz – were arrested by authorities for violating the gun ban.

Here is a handy infographic on prohibited acts during the election period. Hover your mouse pointer over each icon for details about a specific ban. 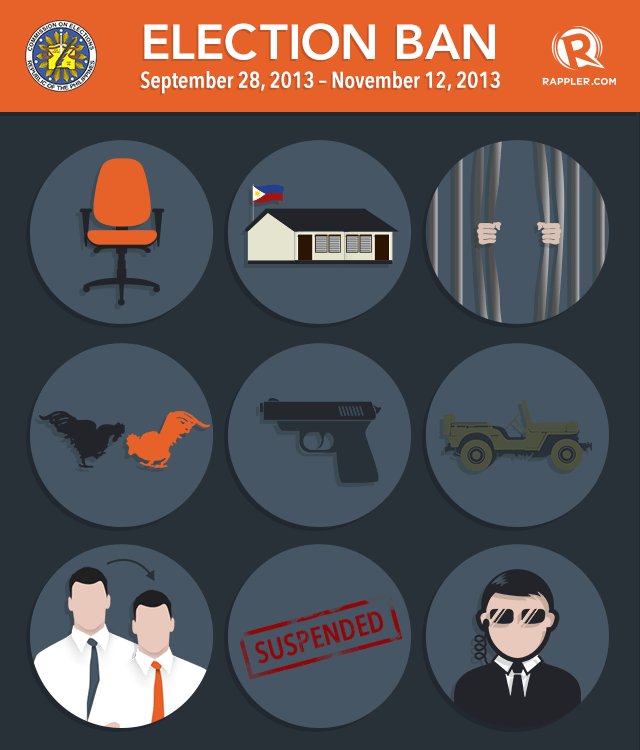 Comelec Resolution No. 9715 also set the following restrictions during the campaign period, on the day before the elections, and on election day itself: