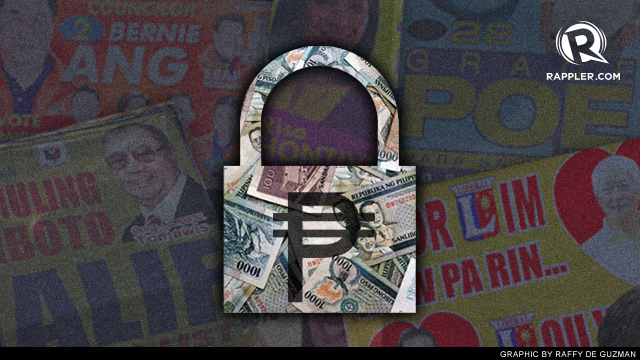 MANILA, Philippines – A lawmaker filed a bill at the House of Representatives that seeks to raise the campaign spending limits of candidates and political parties.

Republic Act 7166 or the Synchronized National and Local Elections Law, introduced in 1991, currently sets the following spending caps for candidates and political parties:

“The ceiling pegged under present laws on authorized expenses of candidates and political parties for campaign purposes are unrealistic and should be increased,” Aliping said.

He added candidates and parties may understate their expenses to comply with reportorial requirements.

Overspending is a valid reason to disqualify a candidate from the eledtions, according to Resolution 9629 of the Commissions on Elections (Comelec).

Since Laguna had 1,525,522 registered voters for the elections, Ejercito should have spent up to only P4.5 million for his campaign.

Ejercito may appeal his disqualification with the Comelec en banc.

So far, the only candidate disqualified by Comelec for overspending was the late former Senator Raul Manglapus, who declared he overspent during a senatorial election in the 1960s. – Rappler.com