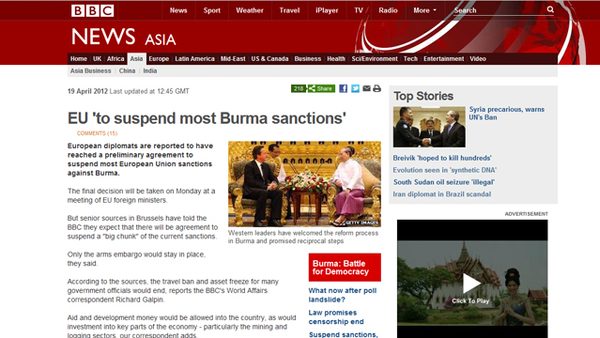 Most European Union sanctions against Myanmar or Burma will be suspended, following mid-elections that saw pro-democracy leader Aung San Suu Kyi and her party winning seats in parliament early April. The final decision on the lifting of the sanctions – except perhaps the arms embargo – will be made on Monday, April 23, during a meeting of the EU foreign ministers. Aid and development assistance, along with European investments, particularly in mining and logging, are expected to come into Myanmar, while exports from Myanmar will be allowed into the EU. Reforms in the country started after the November 2010 elections that transitioned the country from military rule to nominal civilian rule. That military-backed government freed political prisoners, including Suu Kyi.

Read the complete story in the BBC.