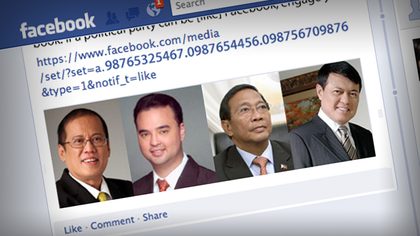 MANILA, Philippines – He’s not pressing the “like” button just yet.

Sen Alan Peter Cayetano said his Nacionalista Party (NP) is open to joining coalitions for the 2013 polls. But not so fast.

With the early noise for next year’s elections, the NP secretary-general said he does not want to forge party agreements just for the sake of jumping on the coalition bandwagon.

In an interview on #TalkThursday, Cayetano told Rappler CEO and executive editor Maria Ressa that the Philippines’ political party system has been about convenience “but that should not stop us from trying.” Watch the interview here:

Cayetano was referring to President Benigno Aquino III’s Liberal Party (LP) and Vice President Jejomar Binay’s newly formed United Nationalist Alliance (UNA). In past interviews, he said the NP had not yet had any formal talks with the 2 groups for the 2013 polls.

The senator admitted that politics has a pragmatic side, but parties should not just be vehicles for election.

Instead, Cayetano said political parties should be like the world’s hottest social networking site.

Cayetano said that if US President Barack Obama’s 2008 presidential campaign was able to re-energize America where only about half of the people vote, Philippine politics can do it as well.

“I really think we can make a difference….We have so many complaints about elections, democracy but 80% to 90% [of Filipinos go out and] vote.”

Despite his idealism, Cayetano has been criticized for being a member of a political dynasty. (Read: More relatives in the Senate come 2013?)

He is running for re-election in 2013. If he reclaims his seat, he will again join his sister, Sen Pia Cayetano, at the chamber. Their father, the late Renato Cayetano, was also a senator. His wife, Lani, is mayor of Taguig.

Cayetano responded to questions from social media users about his family.

Cayetano added that dynasties should not protect its erring members.

“If you’re there and like 5 of you are good, 2 of you are good but here comes the youngest one who is spoiled like in the Sangguniang Kabataan for example and does something wrong and you protect him or her, that’s where it gets bad.”

He echoed the statement of his colleagues that with the trial dragging on, the Senate has not been able to concentrate on other pressing issues like oil prices and the Mindanao power crisis.

“At the very least, we spend 8 hours a day [on the impeachment]. Anyone who tells you we’re balancing, we’re multi-tasking, that statement is a bit sugarcoated.”

Still, Cayetano valued the impeachment process, especially in comparison to other ways of removing leaders.

“I’ve been reading books regarding impeachment. In Latin America, impeachment provided them an outlet of political change without drastic change, military takeover. [It’s] better than political killings, coup d’etat [so] it’s good in that sense.”

‘PNoy needs to do a great job’

Recent surveys have shown that most Filipinos have “less concern” about the impeachment trial as they prioritize gut issues like inflation, salary, and jobs.

Cayetano said Aquino has to balance his campaign to convict Corona with the public’s immediate concerns.

“First of all, the Senate as an institution [is at stake in this impeachment]. The presidency, his presidency is at stake. If you listen to CJ Corona and his supporters, the independence of the judiciary is at stake.”

Asked to assess Aquino, Cayetano said, “I think the President is doing a good job but I think he needs to do a great job.” – Rappler.com