US nuns castigated by Vatican for “radical feminism” 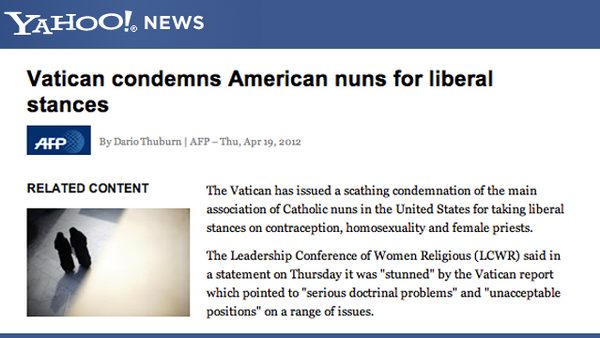 The Vatican condemns the main group of Catholic nuns in the United States for its position on contraception, homosexuality and female priests.
The Vatican report says the nuns had “serious doctrinal problems” and had taken “unacceptable positions”.  The Leadership Conference of Women Religious (LCWR) represents around 45,000 US nuns. The Vatican paper also says that the nuns are guilty of “corporate dissent” from the Church’s doctrines on homosexuality and said it was on the road to “radical feminist themes.” A member of the LCWR says on Twitter: “I think we scare them.” The sister adds, “It’s painfully obvious that the leadership of the Church is not used to having educated women form thoughtful opinions and engage in dialogue.”
Read more on Yahoo! News.