Did Pasay RTC judge try to extort money from Abalos? 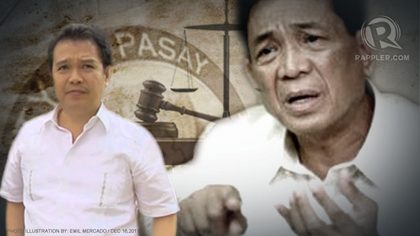 Lawyer Brigido Dulay said two lawyers, who claimed to represent Mupas, told the former Comelec chief that in exchange for up to P100 million, he can get an acquittal.

Dulay said that because his client is being charged with a capital offense punishable by life imprisonment, he deserves an impartial judge.

During today’s hearing at the Pasay City RTC Branch 112, Abalos alleged that two lawyers whom he identified as May Mercado and Jojo Desiderio met with him several times. Desiderio reportedly said he knew Dulay from Ateneo Law School.

Dulay said the two lawyers contacted and separately met with Abalos not long after his electoral sabotage case was raffled to Mupas.

Mercado contacted Abalos and met with him at the Dusit Hotel in Makati. Abalos was accompanied by two other lawyers, Jerusha Villanueva and Robert Bermejo. A day or a few days after, Desiderio met up with the lawyers of Abalos at the Legend Hotel and proceeded to his home, Dulay said.

There was alleged talk of a house arrest being offered in exchange for P20 million. An acquittal was allegedly priced at P100 million. Abalos rejected the offers and did not believe claims of the two that they were emissaries of Mupas.

Abalos met with the two lawyers again. In that meeting, the P100 million had been reduced to P15 million for each favorable decision on his pleadings.

Reports said Mupas denied he knew the lawyers. He also gave Abalos until Monday to show cause why he should not to be cited for contempt for the “malicious” accusations.

Abalos’s lawyers have filed an urgent motion for the Pasay RTC judge to inhibit from hearing the former Comelec chief’s case.

Besides Abalos’s case, Mupas is likewise hearing the electoral sabotage case against Mrs. Arroyo and former Maguindanao Governor Andal Ampatuan Sr. and ex-Comelec official Lintang Bedol. The three allegedly conspired in 2007 to ensure a “12-0” victory for the administration’s senatorial candidates in the province of Maguindanao. – Rappler.com