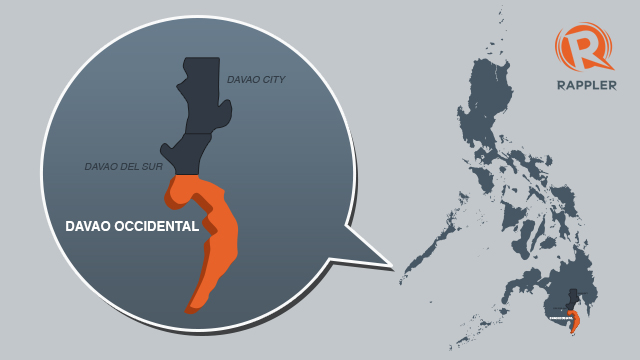 MANILA, Philippines – A new province has been created. Davao Occidental was approved by residents in an October 28 plebiscite.

So how does the country’s 81st province transition from being a former district of Davao del Sur?

A total of 180,162 voters answered “yes,” while 55,139 voted “no” during the plebiscite, according to the Commission on Elections (Comelec) Office of the Provincial Election Supervisor in Davao del Sur. There were 553,092 registered voters in Davao del Sur (excluding Davao City).

Davao Occidental was carved out of the 2nd district of Davao del Sur. It will be composed of 5 towns: capital Malita, Don Marcelino, Jose Abad Santos, Sarangani, and Santa Maria.

(The remaining 2nd district towns – Kiblawan, Malalag, and Sulop – will be merged with the 1st district of Davao del Sur, effectively becoming a lone district.)

Created through Republic Act 10360, Davao Occidental will be part of Region XI, or the Davao Region in Mindanao, together with Compostela Valley, Davao del Norte, Davao del Sur, and Davao Oriental.

It will elect officials only in 2016

Transitory provisions in RA 10360 state that the current elected and appointed officials of Davao del Sur will temporarily govern the newly-created province. The first set of Davao Occidental officials will be elected in 2016.

For the remaining part of 2013, the newly created province will get its internal revenue allotment (IRA) share from its mother province, Davao del Sur.

By January 2014, however, Davao Occidental will have its own IRA, computed against the IRA of the 80 other provinces, according to the Department of Budget and Management (DBM).

Section 83 of the 2013 General Appropriations Act (GAA) state that “all adjustments, changes, modifications or alterations in any of the factors affecting the computation of IRA that occured or happened, including final and executory court decisions, rendered during the current fiscal year shall only be considered and implemented in the subsequent fiscal year. – Rappler.com