MANILA, Philippines – Former President Joseph Estrada said he is still 50-50 about running for Manila mayor in 2013 but he already has a running mate in mind.

In an interview on ANC’s Headstart with Karen Davila Wednesday, April 25, Estrada said he wants to get incumbent Manila vice mayor Isko Moreno to be his vice mayor in next year’s polls. Like Estrada, Moreno is a movie star-turned-politician.

“Hopefully, I could get Vice Mayor Isko Moreno to run,” he said. 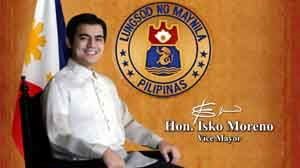 Estrada also took a swipe at Manila Mayor Alfredo Lim, who will be his rival in case he decides to run.

“He has no more vision to develop Manila. [The city needs] some sort of an urban renewal that would change the image of Manila.”

Responding to a question from social media, Estrada said if elected, his first order of business will be to ensure that business permits are issued right away.

The former president reiterated though that he will have to consult Vice President Jejomar Binay and Senate President Juan Ponce Enrile, his fellow members in the core executive committee of their newly formed United Nationalist Alliance (UNA).

Another consideration will be the opinion of his sons.

During his birthday party last week, Sen Jinggoy Estrada said the decision was up to his father. San Juan Rep Joseph Victor “JV’ Ejercito told Rappler that his father has nothing more to prove in politics. (Read: Erap: Manila mayor or no more?)

Estrada started his career as mayor of San Juan, then became senator, vice president and president. Last week, he said he was considering ending his political stint again as a mayor, this time in Manila.

“Manila is close to my heart. I was born there. My father served there for years.”

In the interview, Estrada also said he was open to mending ties with his political foes like Sen Panfilo Lacson and former President Gloria Macapagal-Arroyo, under whose administration he was imprisoned.

“I don’t hold any rancor or grudges. To live happy, I give and I forgive.”

Lacson has also said he wants to make peace with Estrada, his former boss.

In a testimonial on the book Ito ang Pilipino: A tribute to Joseph Estrada, Lacson said he owes what he is now to Estrada, who gave him a break in the Presidential Anti-Crime Commission during the Ramos administration. The Inquirer published his tribute here.

The two had a falling out in past years, largely due to their difference in opinion over jueteng. Estrada wanted to legalize the numbers game while Lacson was against it. When he was accused of allegedly plotting the murder of PR man Bubby Dacer, Estrada claimed innocence and said Lacson probably knew more about it. This angered the senator.

Estrada said there is still nothing final in the senatorial slate of UNA. (Read more about UNA and its slate here.)

He said the inclusion of Zambales Rep Mitos Magsaysay and former Bukidnon Rep Juan Miguel Zubiri in the ticket is not yet final.

Asked by Davila if he would agree to include Ilocos Sur Gov Luis “Chavit” Singson in the slate, he laughed, “No comment.”

Once Estrada’s friend, Singson blew the whistle on the payoffs Estrada received from jueteng. The accusations eventually led to Estrada’s ouster. – Rappler.com