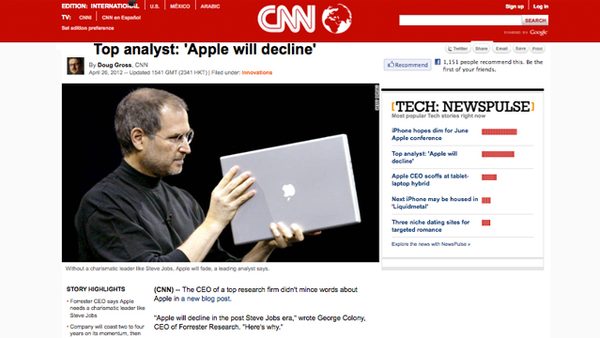 “Apple will decline in the post Steve Jobs era,” wrote George Colony, CEO of top research firm Forrester Research in his new blog post. The company which produced phenomenons like the iPhone and iPad will coast for 2-4 years on its current momentum, Colony said, but will need a charismatic leader like Steve Jobs, who died in October. The death of Jobs left a void because his successor, Apple CEO Tim Cook, according to Colony, doesn’t possess Jobs’ star power. Without “a new charismatic leader it will move from being a great company to being a good company, with a commensurate step down in revenue growth and product innovation,” Colony wrote. Shifting to a more bureaucratic leader like Cook won’t work for Apple, Colony said. Forrester is a global technology research company which he founded in 1983 and is considered a leader in analyzing the technology industry.

Read the complete story on CNN.